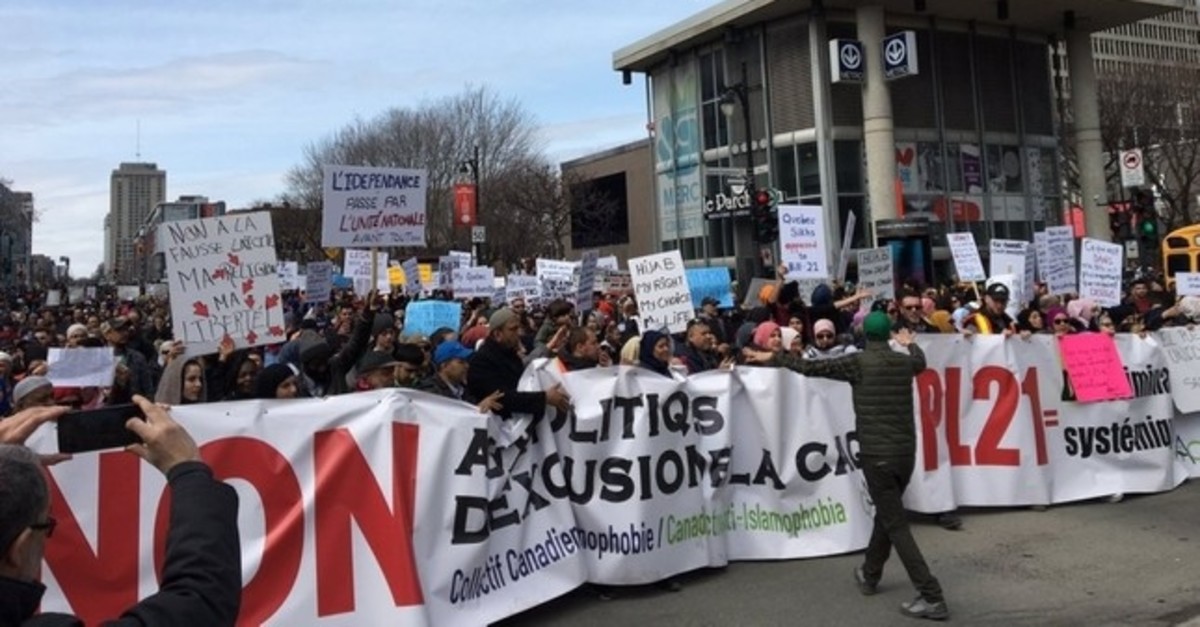 Demonstrators march to protest the proposal in Quebec, Canada. (IHA File Photo)
by Compiled from Wire Services Nov 20, 2019 11:35 am

A union federation representing 45,000 teachers in Quebec is suing the Canadian province over its ban on the wearing of religious symbols by civil servants.

The lawsuit by the Fédération Autonome de l'Enseignement (FAE) challenges a state secularism law passed this year prohibiting certain civil servants from wearing religious symbols, such as hijabs and crosses, while at work. The ban, from which existing employees are exempt, affects newly-hired police officers, teachers and lawyers. Other public employees, such as doctors and bus drivers, are exempt from the ban as long as their faces are not concealed. It effectively bans the wearing of hijabs, crucifixes, turbans and kippahs while workers are in their place of work.

Quebecois law firm Gattuso Bourget Mazzone is handling the lawsuit on behalf of its client, the FAE. Several other groups, including a civil liberties organization and the National Council of Canadian Muslims, have also filed lawsuits, arguing that the ban unfairly targets Muslim women who wear the hijab.

"We want the court to declare that the rights of our members have been violated by the government; the right to freedom of religion, of course, but also the right to equality, because the vast majority — if not all — of those who will be impacted are women," said Remi Bourget, a partner in the law firm. About 75% of teachers in Quebec are women.

A student studying to become a teacher, as well as Montreal’s English school board, are among those who have also filed lawsuits.

Nour Farhat, who wears the Muslim hijab, and studied law to become a prosecutor, is among those affected. The religious symbols law means she cannot represent the state as long as she wears the hijab. She has been hired to represent teachers opposing the law and will be in court to argue against it — in her hijab.

“I can’t work with the government; they don’t want me to work with them. Well, now I have the opportunity to work against them,” Farhat said.

The 28-year-old lawyer said the law, known as Bill 21, has fanned the flames of racism in the province. She said she began receiving insults and death threats by email after a French-language law journal published her op-ed criticizing Bill 21.

Sylvain Mallette, president of the FAE, said Bill 21 jeopardizes teachers’ jobs and working conditions. Prime Minister Justin Trudeau, meanwhile, criticizing the bill, said that the government had no right to tell people how to dress and did not rule out the possibility of the federal government intervening.

At the same time, Quebec premier Francois Legault warned Trudeau not to interfere, especially given the popularity of the new law among Quebecois. Meanwhile, anti-Muslim sentiment is on the rise in Quebec. Some 58% of hate crimes in Montreal this year have targeted Muslims, the police have announced.