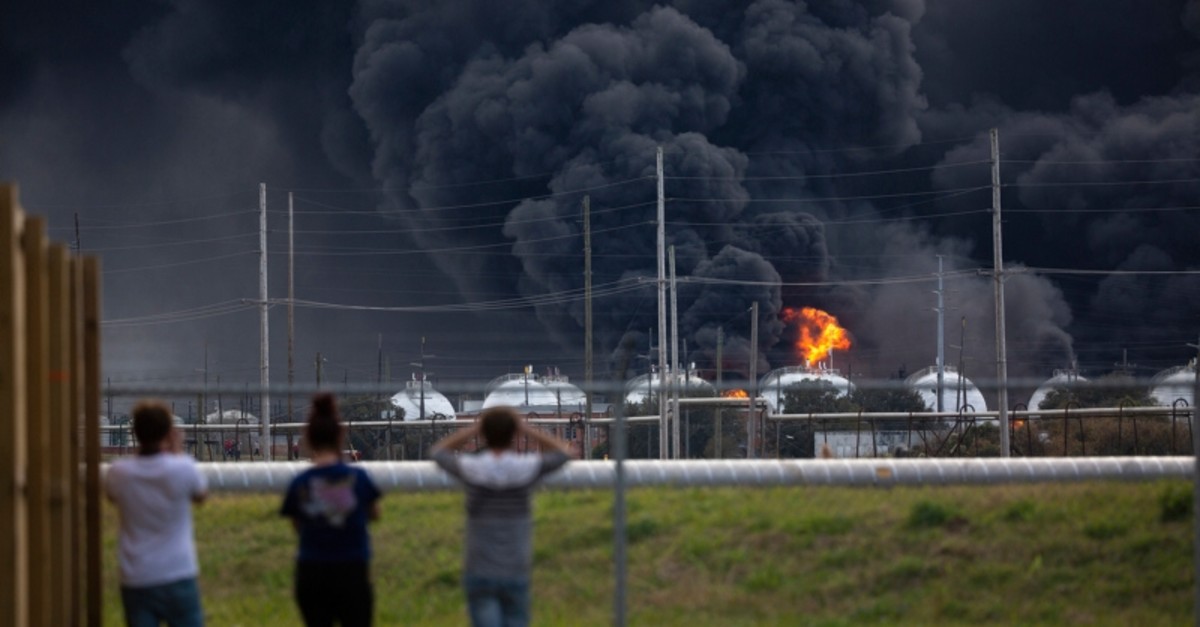 A major fire at a Texas petrochemical plant continued to burn for a second day on Thursday, with the 60,000 people forced to evacuate still uncertain if they would be able to return home in time to celebrate the Thanksgiving holiday.

The fiery blast inside a distillation column at the Port Neches, Texas, TPC Group facility on Wednesday injured three workers, blew locked doors off their hinges and spewed a plume of toxic chemicals for miles.

The plant manufactures petrochemicals used to make rubber and resins, and the volatile organic compounds in the explosion's smoke can lead to eye, nose and throat irritation, shortness of breath, headaches and nausea, the pollution regulator Texas Commission on Environmental Quality (TCEQ) said. No impact to water was reported.

The plant, 90 miles east of Houston, has a long history of environmental violations and has been out of compliance with federal clean air laws for years, according to the Texas Tribune and state records; it was also declared a high priority violator by the Environmental Protection Agency.

TPC spokesperson Sara Cronin said it was uncertain when the fire would be extinguished or the chemicals burned off but pointed the public to the company's emergency response website at www.portnechesresponse.com. The explosion was the fourth major petrochemical fire in the region this year.

Early Wednesday morning, people more than 30 miles away from the complex were shaken awake by the 1 a.m. local time blast, sources familiar with the firefighting and rescue operations said.

The blast collapsed a roof over the plant's control room, sending workers fleeing, and damaged its fire suppression system.

Some homes close to the plant also sustained heavy damage, and police went door-to-door early in the morning to check if residents were injured, said the Jefferson County Sheriff’s Office.

Troy Monk, TPC Group’s director of health, safety and security, said the company would form an investigative team to determine what led to the explosions.

“We’re staying focused on the safety of our emergency response personnel folks in and around in the community as well as trying to protect the environment,” Monk said at a news conference.

Monk had said the blast occurred in an area of the plant that makes butadiene, a chemical used to make synthetic rubber and other products. Officials on Thursday evening, however, said that early concerns about butadiene contamination from the blast haven’t materialized, as they learned the main storage area for that cancer-causing chemical didn’t take the brunt of the fire.

Environmental Protection Agency spokesman Adam Adams said that while volatile organic compounds were detected by some of the 20 teams monitoring air pollution in the area, none of them detected levels higher than five parts per million, the agencies’ “action level.”

Judge Branick, the top county official, told KFDM that it’s a miracle no one died. He said one worker suffered burns, and the others had a broken wrist and a broken leg.

Texas has seen multiple petrochemical industry blazes this year, including a March fire that burned for days near Houston and another that killed a worker at a plant in nearby Crosby.

In the March fire, prosecutors filed five water pollution charges against the company that owns the petrochemical storage facility after chemicals flowed into a nearby waterway.