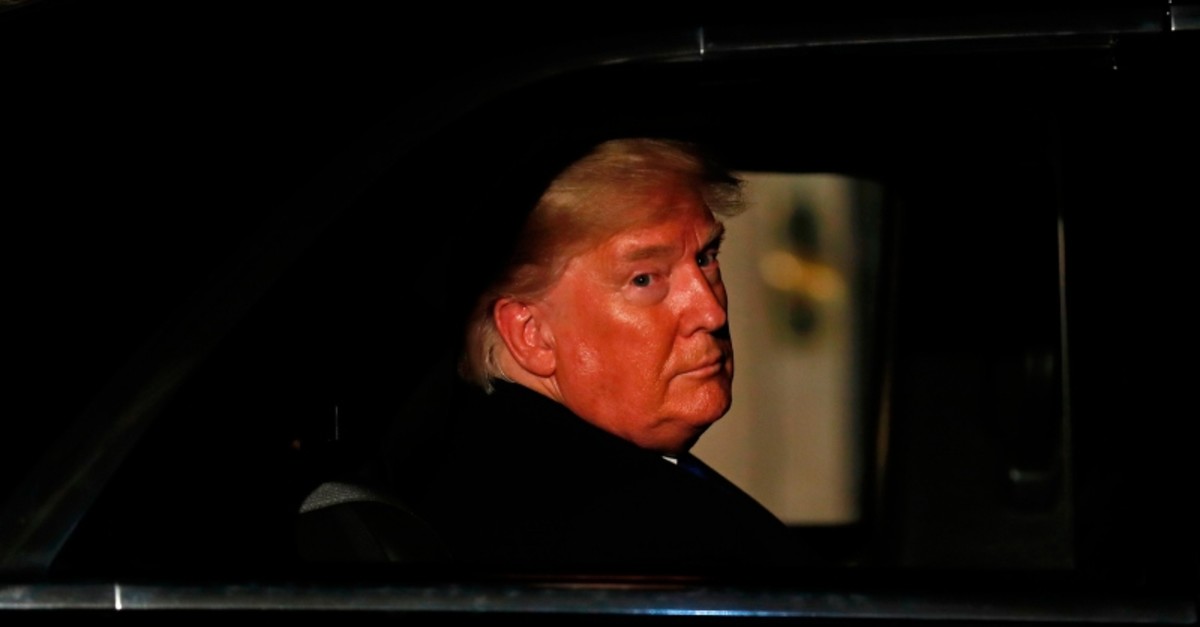 US President Donald Trump leaves 10 Downing Street in central London on December 3, 2019, after attending a reception hosted by Britain's Prime Minister Boris Johnson ahead of the NATO alliance summit. (AFP Photo)
by Dec 04, 2019 2:15 am

Democrats presented a forceful case for impeaching and removing President Donald Trump from office Tuesday in a report detailing "overwhelming evidence" of misconduct in office and obstruction by the US leader.

Immediately dismissed by the White House as the product of a "one-sided sham process," the House Intelligence Committee report accused Trump of subverting national security as he pressured Ukraine for dirt on a Democratic election rival.

The 300-page report, meant to serve as the basis for articles of impeachment, also mapped out in detail what it called an unparalleled effort of obstruction, including witness intimidation, to stifle the investigation into Trump's Ukraine scheme.

"The president placed his personal political interests above the national interests of the United States, sought to undermine the integrity of the US presidential election process, and endangered US national security," said the final report on the Intelligence Committee's investigation.

"President Trump and his senior officials may see nothing wrong with using the power of the office of the president to pressure a foreign country to help the president's reelection campaign," it said.

"However, the Founding Fathers prescribed a remedy for a chief executive who places his personal interests above those of the country: impeachment."

The report, the product of a rapid-fire probe sparked by a whistleblower's complaint in August, mapped out a months-long scheme by Trump, his personal lawyer Rudy Giuliani and senior diplomats to pressure Ukraine's president into investigating Joe Biden, the current favorite to win the Democratic White House nomination in 2020.

Trump also pressured President Volodymyr Zelensky to investigate a "conspiracy theory" that it was Ukraine, and not Russia, that interfered in the 2016 US election, to benefit the Democrats.

In both cases, the report said, Trump conditioned nearly $400 million in US military aid and a high-profile summit with Zelensky on Kiev opening the investigations.

"This report chronicles a scheme by the president of the United States to coerce an ally, Ukraine, that is at war with an adversary, Russia, into doing the president's dirty work," he told reporters.

Secondly, the report said, Trump actively sought to obstruct the congressional probe, refusing to provide documents to investigators, preventing witnesses from appearing, and threatening some of those who did appear.

"Donald Trump is the first president in the history of the United States to seek to completely obstruct an impeachment inquiry undertaken by the House of Representatives," it said.

"If left unanswered, President Trump's ongoing effort to thwart Congress' impeachment power risks doing grave harm to the institution of Congress, the balance of power between our branches of government, and the Constitutional order that the President and every Member of Congress have sworn to protect and defend."

In London for a NATO summit, Trump again accused the Democrats of playing a political game.

His spokeswoman Stephanie Grisham doubled down in dismissing both the report and Schiff's investigation.

"At the end of a one-sided sham process, Chairman Schiff and the Democrats utterly failed to produce any evidence of wrongdoing by President Trump," she said in a statement.

The report "reads like the ramblings of a basement blogger straining to prove something when there is evidence of nothing."

The report is expected to form the basis for the House Judiciary Committee to draw up formal charges, or articles of impeachment, in coming weeks.

If, as expected, the articles are passed by the Democratic-led House, the case will go to the Republican-controlled Senate for trial in January.

The Judiciary panel, which begins meeting on Wednesday, has set no formal timeframe.

But Democrats have aimed to hold a full House vote on articles of impeachment before the body goes on break for Christmas, December 25.

Schiff said that while the Judiciary Committee meets, his panel could continue investigating other angles of the Ukraine scheme, including whether Trump actually began much earlier, pressuring Zelensky's predecessor Petro Poroshenko for the investigations, and whether some members of Congress were involved.

But he stressed the need to move quickly, accusing Trump of seeking election help not only from Ukraine but Russia and China.

"There is I think grave risk to the country with waiting until we have every last fact when we already know enough about the president's misconduct to make a responsible judgement," Schiff said.