US warns Russia against election meddling 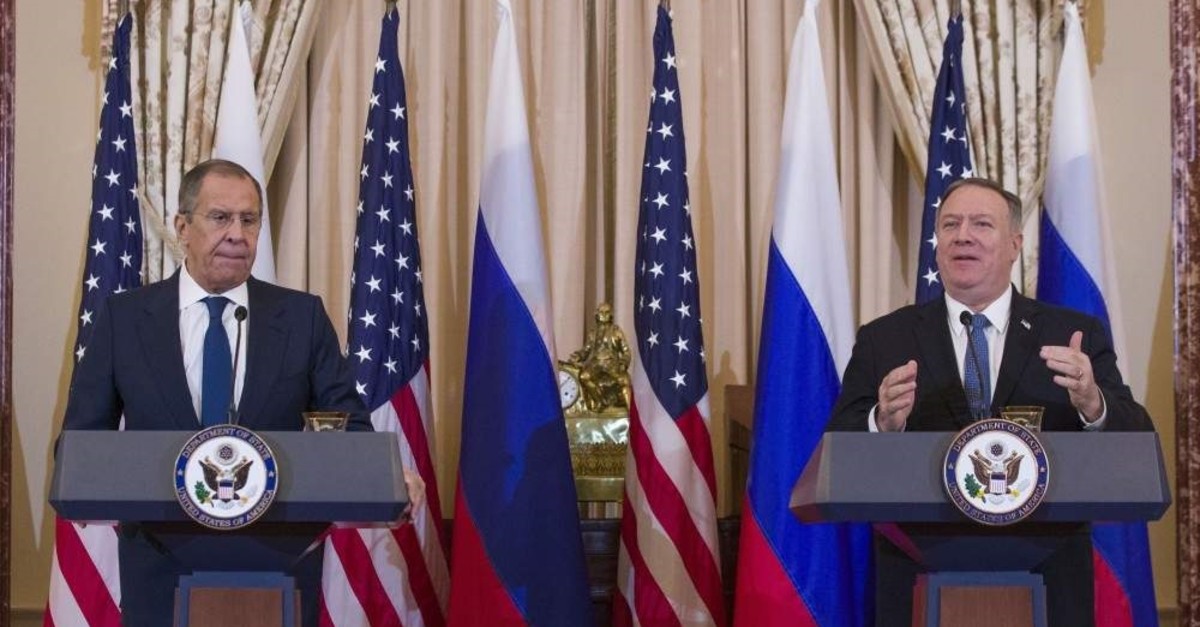 Russian Foreign Minister Sergey Lavrov, left, listens as Secretary of State Mike Pompeo speaks during a media availability, after their meeting at the State Department, Tuesday, Dec. 10, 2019, in Washington. (AP Photo)
by Associated Press
Dec 11, 2019 12:38 am

U.S. President Donald Trump met Tuesday with the Russian foreign minister at the White House just hours after articles of impeachment were unveiled against him and a day after a Justice Department watchdog report declared the FBI was justified in opening an investigation into ties between Moscow and Trump's 2016 campaign.

Sergey Lavrov's visit to Washington, his first since May 2017, was overshadowed by the introduction of Ukraine-related impeachment articles by the House and Trump's complaints about the watchdog's report.

Lavrov met earlier in the day with Secretary of State Mike Pompeo, who warned against Russian interference in U.S. elections. Lavrov repeated denials of Russian interference, calling them “baseless." Special counsel Robert Mueller, who took over the Trump-Russia investigation from the FBI, determined that Russia interfered in the election in an effort to help Trump beat his 2016 Democratic opponent, Hillary Clinton.

“I was clear: It's unacceptable, and I made our expectations of Russia clear,” Pompeo said of election interference. "The Trump administration will always work to protect the integrity of our elections. Period. Should Russia or any foreign actor take steps to undermine our democratic processes, we will take action in response.”

Lavrov derided the “wave of suspicions that has overcome Washington" related to election interference, renewing demands that evidence of such activity be given to Moscow.

“All speculation about our alleged interference in domestic processes of the United States is baseless,” Lavrov said. “No one has given us this proof because it simply does not exist." He raised an oft-repeated Russian proposal to release confidential communications with the U.S. to resolve the concerns in 2016 that he said the Obama administration rebuffed.

Pompeo did not appear impressed by Lavrov's offer and said the U.S. had already published its conclusions. "We don't think there is any mistake about what transpired," he said of the finding.

Pompeo and Lavrov also discussed arms control agreements, Ukraine, Syria and Venezuela. The two noted cooperation in counterterrorism and anti-narcotics efforts that has continued despite the tensions and expressed hope that shared goals for North Korea and Iran could be realized.

But, they also acknowledged that their differences are significant and include the New START arms control treaty that is due to expire next year and the tit-for-tat expulsions of diplomats by both countries.

On the treaty, Russian President Vladimir Putin favors an extension of the pact, but Trump has said he wants China included if it is to be extended. Lavrov noted that Beijing has said it isn't interested in joining but reiterated Moscow's desire to keep the deal alive.

Lavrov's last meeting with Trump took place shortly after the president fired FBI Director James Comey, a move that the Republican president later said was made because of the Russia investigation.

Earlier Tuesday, Trump attacked Comey's replacement, Christopher Wray, whom he handpicked for the job, for agreeing with the inspector general's conclusion that the Russia probe was not politically motivated. Trump repeatedly has alleged that it was.

Ahead of the meeting, Trump ally, Sen. Lindsey Graham, R-S.C., said the president should tell Russia that if it meddles in the 2020 election, the bilateral “relationship is going to be over in a permanent way. Call Russia out for what they're doing, inside of Syria, try to get them to stop being so disruptive in Syria.”

The chairman of the House Foreign Affairs Committee, Rep. Eliot Engel, D-N.Y., expressed doubt that Trump would demand accountability from the Russians.

“President Trump’s pattern of cozying up to autocrats and our adversaries harms American interests and undermines American leadership," he said. “While dialogue with the Russians is important, especially for strategic stability and the future of arms control, I have no confidence in President Trump to defend our interests in these conversations.”

Lavrov arrived in Washington after a meeting in Paris on Monday between Putin and Ukrainian President Volodymyr Zelenskiy, along with the French and German leaders, at which they agreed to revive the peace process on the bloody separatist conflict in eastern Ukraine and exchange all their prisoners.

But they failed to resolve crucial issues such as a timeline on local elections and control of the borders in the rebel-held region. Still, Russian and Ukrainian officials on Tuesday described the talks as a step toward peace and pledged to continue negotiations.

Pompeo said that he and Lavrov “spent a fair amount of time talking about Ukraine” and that the U.S. would not relent on its stance that Crimea, the peninsula that Russia annexed in 2014, “belongs to Ukraine.” He did not address the impeachment inquiry as it relates to Ukraine but said he is “proud of what this administration has done in defense of that country's sovereignty and security.”