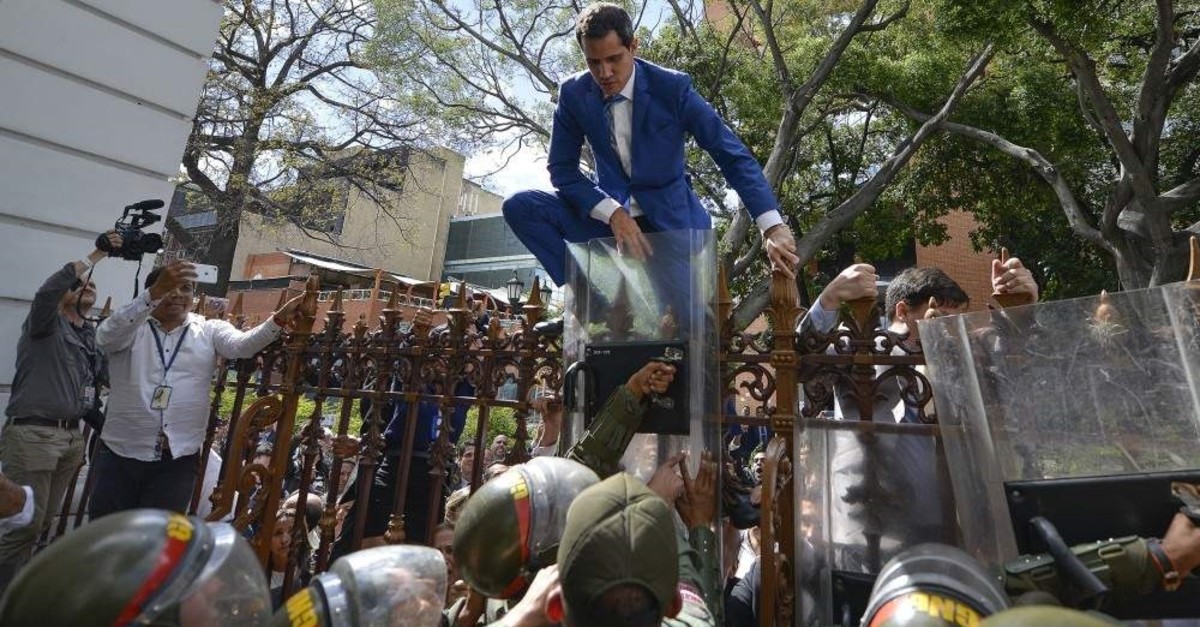 National Assembly President Juan Guaido, Venezuela's opposition leader, climbs the fence in a failed attempt to enter the compound of the Assembly, as he and other opposition lawmakers are blocked from entering a session to elect new Assembly leadership in Caracas, Venezuela, Sunday, Jan. 5, 2020. (AP Photo/Matias Delacroix)
by Compiled from Wire Services Jan 06, 2020 4:13 pm

Venezuela's National Assembly approved two separate speakers in two separate votes Sunday after opposition lawmakers held their own vote when they were locked out of the parliament session.

The chaotic day left it unclear who would lead the National Assembly, with an official but disputed vote picking Luis Parra – who is backed by embattled Venezuelan President Nicolas Maduro – and opposition lawmakers re-electing self-declared interim president Juan Guaido as the leader of the body.

Parra won with the votes of the Socialist Party of President Maduro and defectors from the opposition coalition, reportedly receiving 84 votes.

But this came after security forces prevented Guaido and several dozen other opposition lawmakers from entering the building to have their say, according to local media reports.

Opposition lawmakers then reconvened at the offices of a local newspaper and voted a second time.

By that count, Guaido received 100 votes, and the opposition declared him the winner. The National Assembly has 165 seats.

In a later tweet, Guaido declared himself president of the National Assembly, saying that a voting session had been held by the majority of the deputies. He was then congratulated by U.S. Secretary of State Mike Pompeo on Twitter.