US sends home 21 Saudi trainees after shooting at Florida base 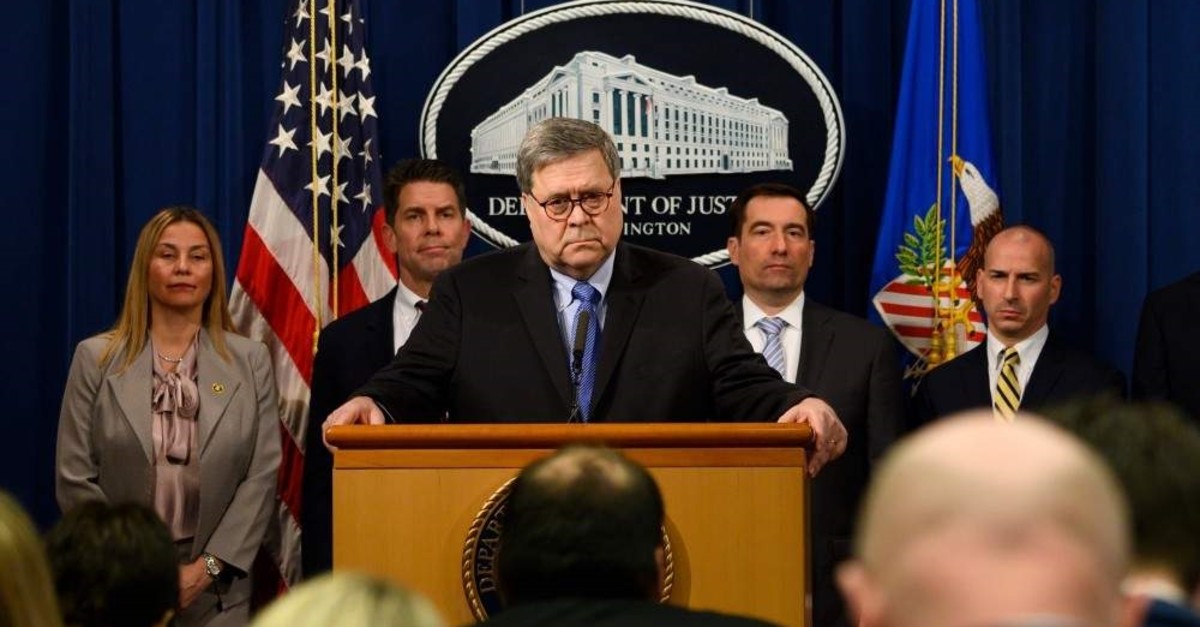 U.S. Attorney General William Barr (C) and FBI Deputy Director David Bowdich (2nd L) hold a news conference regarding the December 2019 shooting at the Pensacola Naval air station in Florida, at the Department of Justice in Washington, D.C., Jan. 13, 2020. (AFP Photo)
by Compiled from Wire Services Jan 13, 2020 11:34 pm
The United States will send 21 Saudi military trainees back to the Gulf kingdom after an investigation into the fatal shooting of three American sailors last month, the Justice Department announced Monday.
The 21, who the investigation found possessed terrorist material and child pornography, have been expelled from their air force training at a Florida military base, said Attorney General Bill Barr.
"The Kingdom of Saudi Arabia determined that this material demonstrated conduct unbecoming an officer in the Saudi Royal Air Force and Royal Navy and the 21 cadets have been dis-enrolled from their training curriculum in the U.S. military and will be returning to Saudi Arabia later today," Barr said.
Barr called the Dec. 6 shooting by Royal Saudi Air Force 2nd Lt. Mohammed Saeed Alshamrani an "act of terrorism."
Alshamrani killed three U.S. sailors and wounded eight other people in a classroom building at the Pensacola Naval Air Station before being shot dead by police.
Prior to the shooting, Alshamrani visited a memorial to the Sept. 11 attacks in New York City, made statements online critical of American military action overseas and professed a belief that violence was necessary to defend Muslim countries, law enforcement officials said in revealing new details about the motive of a shooting that focused attention on the presence of foreign trainees on American bases and the quality of vetting.
Officials had said earlier Alshamrani hosted a party before the shooting, where he and others watched videos of mass shootings. The gunman had also apparently taken to Twitter before the shooting to criticize U.S. support of Israel and accuse America of being anti-Muslim, another U.S. official told the AP last month.
Alshamrani, who was killed by a sheriff’s deputy during the rampage at a classroom building, was undergoing flight training at Pensacola, where foreign military members routinely receive instruction.
The December shooting raised questions about how well international military students are screened before they attend training at American bases. Some lawmakers, including a top Republican ally of President Donald Trump, have called for Saudi Arabia to be suspended from an American military training program.
Trump called for the program to be reviewed. But Sen. Lindsey Graham, R-S.C., said the program needed to be reevaluated after the attack.
A Saudi commanding officer had ordered all students from the country to remain at one location at the base after the attack.
National security adviser Robert O’Brien said in an interview on Fox News that the shooting “showed that there had been errors in the way that we vetted" the students. The actions being taken by the Justice Department and Defense Department to remove the Saudi students are to “protect our service men and women," he said.
Federal officials are still investigating the shooting and examining evidence. Last week, the FBI asked Apple to help extract data from two iPhones that belonged to the gunman.
Investigators have been trying to access the two devices – an iPhone 7 and an iPhone 5 – but have been unable to access them because the phones are locked and encrypted, according to a letter from the FBI’s general counsel, Dana Boente. The FBI has received a court authorization to search the phones and the devices have been sent to the bureau’s lab in Quantico, Virginia, he said.
The investigation is considered a “high-priority national security matter,” Boente said in the letter.
FBI officials have sought help from other federal agencies and other experts, and investigators have been trying to guess the passwords, but those efforts have been unsuccessful, according to the letter.
Apple said in a statement that it has already provided investigators with all the relevant data held by the company and would continue to support the investigators.
At least one of the phones was shot by a sheriff’s deputy during the attack, but investigators believe they may still be able to extract data from the device, according to a person familiar with the matter. The person spoke on condition of anonymity to discuss an ongoing investigation.
RELATED TOPICS