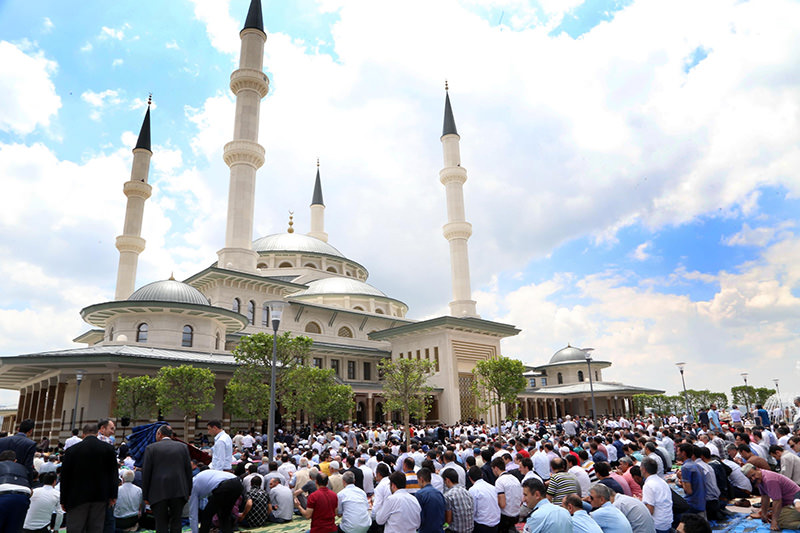 President Recep Tayyip Erdoğan inaugurated a mosque in the new, sprawling Presidential Palace complex in Ankara's Beştepe district on Friday. The mosque is an addition to other projects including a library to grant further public access.

The mosque, called the Beştepe People's Mosque, is located on a site covering over 5,000 square meters and has a capacity of up to 3,000 people.

Since its opening, the Presidential Palace, or külliye – a type of Islamic social complex in the Ottoman era – as Erdoğan calls it, has been targeted by critics of the president. An association of architects spearheaded the campaign by frequently issuing statements denouncing the astronomical costs of everything from cutlery to furniture in the palace. The presidency has repeatedly denied the claims while the association failed to provide evidence of the costs.

Lashing out at critics, Erdoğan dismissed claims of the high expenses of the palace and said he was merely a temporary occupant of the complex "which belongs to the nation, not the president." Erdoğan challenged critics to offer solid proof of the alleged high costs. He invited Kemal Kılıçdaroğlu, chairman of the Republican People's Party (CHP), to visit the compound after he claimed the palace has golden toilet seats so that he could inspect the restrooms. Kılıçdaroğlu later retracted his remarks.

The presidency has also released a time-lapse video to counter the claim that a large, round table where Erdoğan hosted an iftar dinner cost at least TL 240,000 ($90,000). The video showed the table, which looked like one piece, was many smaller tables merged together for the dinner. Erdoğan has said the table, or tables, had cost only TL 4,600.

On Monday, a virtual tour of the compound was introduced on the presidency's website. Viewers can access 360-degree rotating panoramic photos of several venues, from the main entrance where Erdoğan welcomes his guests to the halls where meetings are held. Photos reveal that the palace, although far from humble, is not overtly luxurious as claimed.

Speaking at the inauguration ceremony, Erdoğan said the presidential complex was a distinguished example of Turkish architecture and the mosques were a source of pride. Erdoğan said more mosques would be built in Ankara's hills after Kocatepe and Beştepe, which mean Big Hill and Five Hills, respectively, in Turkish, in the vein of the seven mosques on seven hills overlooking Istanbul. The president said that the mosque had Seljuk and Ottoman features.

He said that the construction of a congress center inside the complex is still underway and will likely be completed by the end of 2015. He said the center will be used for meetings by ministries and public agencies.

Erdoğan also said construction of a presidential library will be wrapped up within two years. The library, equipped with up-to-date technology, will be able to house 5 million books, Erdoğan said.

The Beştepe People's Mosque has four 60 meter-high minarets and is one of the largest mosques in Ankara. It has three floors, including a basement and a second floor exclusively for female worshippers. A 21-meter-wide dome covers the mosque with four smaller domes some 8 meters wide. The mosque has handicapped access and two elevators for access to the worshipping area from restrooms to the mosque.
Presidential spokesman İbrahim Kalın said the Presidential Palace complex has already received members of the public. He said they hoped the virtual tour launched on Monday would disprove what he called "mythical stories" about the compound. Kalın ensured further public access, saying that multi-purpose halls to be opened in the coming months in the compound would have public access for their use to host events.

Sprawling over an area of 300,000 square meters, the presidential compound includes one main building, another building for meeting with visiting heads of state and dignitaries, guesthouses, gardens, a park and other facilities.

Erdoğan, in October 2014, moved into the new palace compound from Çankaya, the iconic presidential mansion in the eponymous district of the capital. The complex is located in Atatürk Forest Farm, a vast protected forested area hosting a large farm founded by Mustafa Kemal Atatürk, founder of the Republic of Turkey. 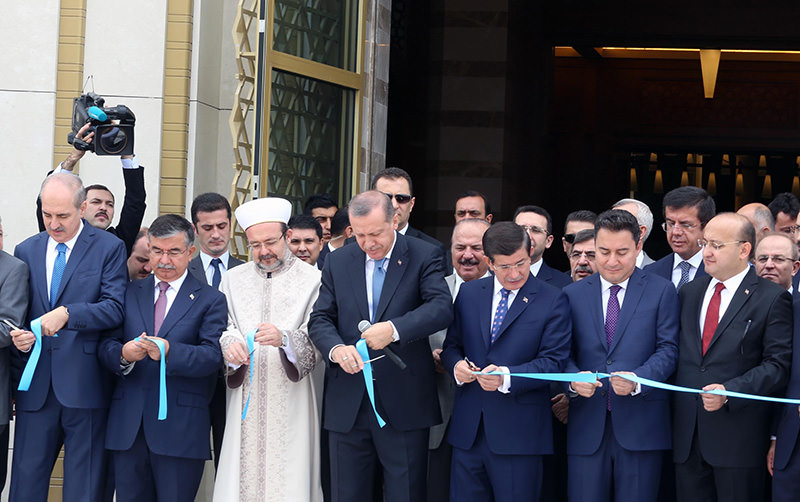