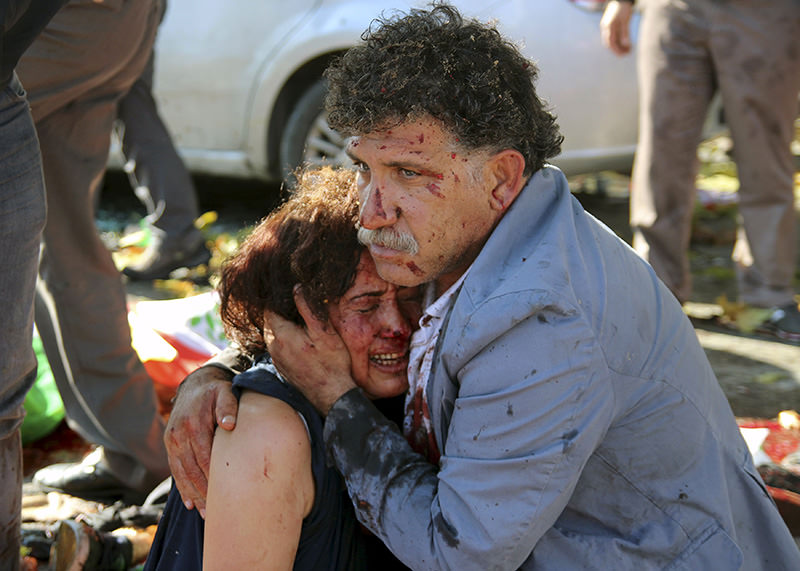 by Daily Sabah with Agencies Oct 10, 2015 12:00 am
97 people have been killed, 246 injured by two explosions near Ankara's main train station early Saturday, where the Confederation of Public Sector Trades' Unions (KESK) and other labor unions were planning to hold a "Labor, peace, democracy" rally at Sıhhiye Square to call for an end to the renewed conflict between the terrorist organization PKK and the Turkish state.

Turkish government officials said the blast outside the main train station in the capital Ankara on Saturday was a "terrorist attack".

The initial figures first suggested that the death toll was 62, but as more people died in hospital, death toll in the deadly terror blast increased to 97, the prime minister's office announced on Sunday night.. Turkish health minister said on Saturday that, there were 186 patients in hospital, 28 of whom were in intensive care unit, and eight of whom were currently undergoing surgery.

"At the scene, 62 people were killed and 24 succumbed to death in hospital," he said. "Twenty-four people were severely injured," the health minister said.

The number of dead makes the attack the deadliest in recent Turkish history. 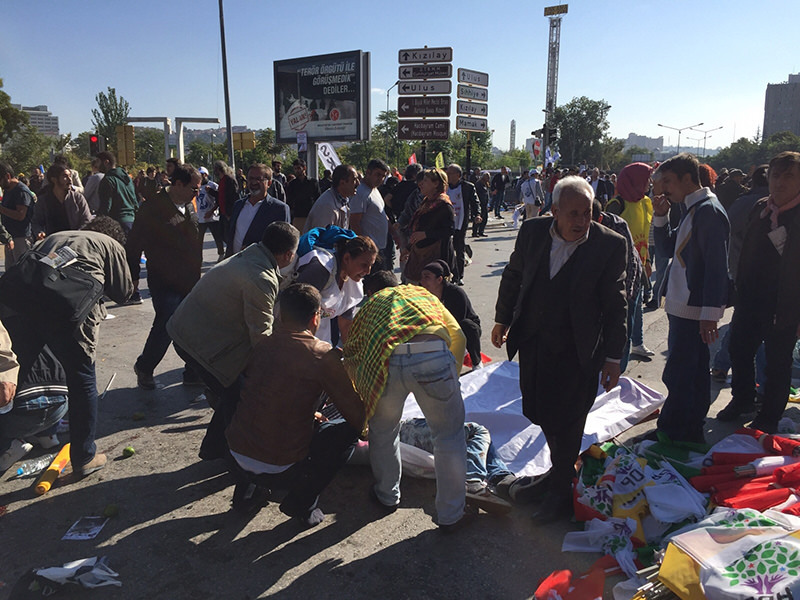 The attack outside Ankara's main train station targeted those gathering to attend a lunchtime demonstration to call for an end to the renewed conflict between the PKK terrorist organization and the Turkish state.

Approximately 14,000 people are understood to have been in the area at the time of the explosions. Officers are working to confirm the number of casualties, a spokesperson for Ankara police said.

A video on social media showed a ring of young people dancing and singing before an orange blast erupted in the background.

Following the attack, for which no group has claimed responsibility, bodies lay in front of the station on Hipodrum Street and paramedics tended to the injured as a police helicopter circled overhead.

Police later warned people to disperse over concerns of further explosions as rally organizers made pleas over loudhailers for people to give blood, an Anadolu Agency correspondent at the scene said.

The health ministry said 56 ambulances and five air ambulance helicopters were sent to the scene of the blast. All of the capital's hospitals have been treating the victims.

The blast area was quickly closed as police began their investigation.

Eye-witnesses said there were two consecutive blasts within seconds - later confirmed by the interior ministry - and there was an unconfirmed report that at least one suicide bomber was responsible.

The attack was carried out before the crowd reached Sıhhiye Square, where police had established a security cordon.

Interior Minister Selami Altınok defended security at the rally, saying police carried out searches at the rally site. No searches were conducted at the scene of the attack, which was outside the security cordon.

"There were no security flaws before the Ankara peace demonstration," he said.

He denied claims that an unexploded bomb had been found at the site of the explosions.

Train services were delayed at the train station after the blast, Turkish State Railways said. Several windows of the station were shattered by the force of the blasts.

Meanwhile, PM Ahmet Davutoğlu was briefed by the interior, health ministers about the bomb blast, and called for a meeting at 12 p.m. with Ankara governor, intelligence and police officials to discuss the attack.