Winter takes its toll on Turkey, 8 killed in bus crash on Kırşehir-Ankara highway 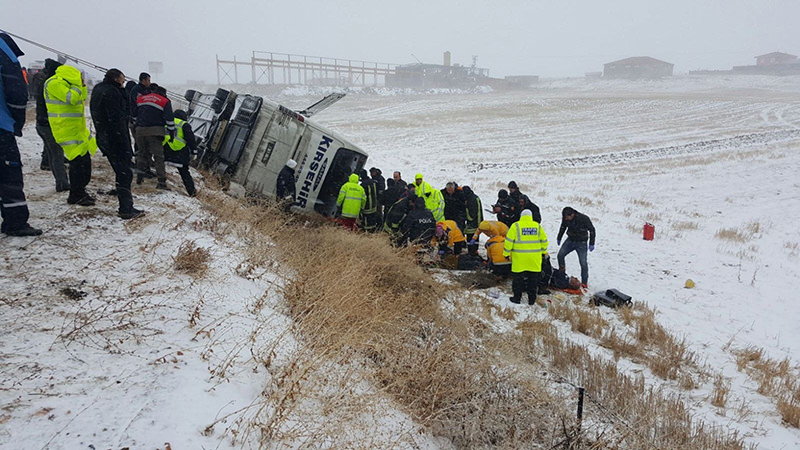 | AA Photo
by Daily Sabah with AA Jan 04, 2016 12:00 am
Turkey has grappled with snowstorms since last week, which disrupts traffic and often causes accidents. As a result of a severe snowstorm, eight people were killed and 26 others were injured in central Turkey on Monday when a bus overturned.

Speaking to reporters, Kırşehir Governor Necati Şentürk said that three of the injured were in a critical condition.

One injured passenger, Şakir İpek, said the accident felt like an "earthquake".

"I was sitting next to my mother and stirring her tea, [then] something happened like an earthquake."

"We were driving on the right side of the double-lane road. I was looking for my mother on the floor. Three or four people were lying there. I believe they were dead," he added.

The victims were aboard a passenger bus traveling from city of Kırşehir to capital Ankara, when it drifted on the icy road and overturned near Kırşehir's Kaman district. Authorities said there were 27 passengers aboard and those injured were in good health. Paramedics and firefighters rushed to the scene blanketed with snow to recover the bodies and the injured.

The injured were taken to Ahi Evran University Hospital in the province.

Media reports said the driver lost control of the bus on the slippery road, one of the main transit routes from southeastern, southern and central Turkey to the capital.

Snowfall across Turkey and temperatures dropping below zero continue to affect daily life one week after a new weather system hailing from the Black Sea wreaked havoc on the western parts of the country. Snowstorms clogged roads, especially in remote villages, while main roads connecting cities in western and northern Turkey have seen a slowdown in traffic due to precipitation.

Snowfall is expected to become less intense this week, according to the weather forecast. Meteorologists say it will be replaced with rainfall, which will continue until the weekend in all cities with a few exceptions in the western cities on the Aegean coast.
Last Update: Feb 03, 2016 11:54 am
RELATED TOPICS