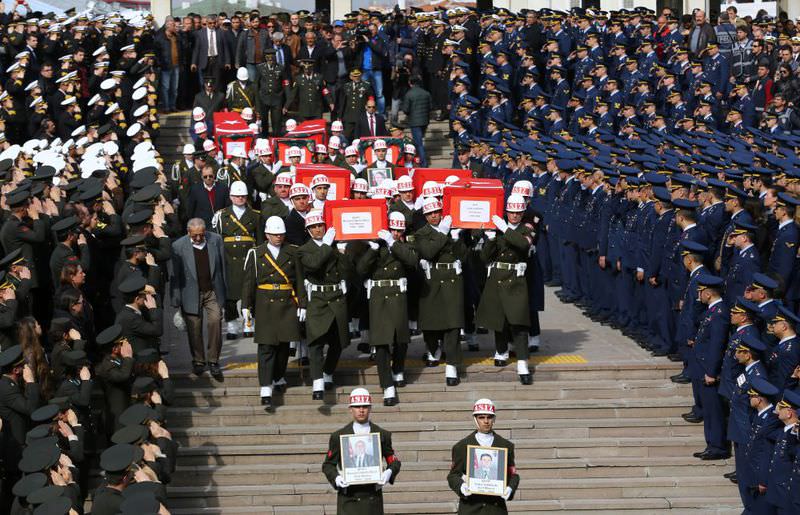 Honor guards carry the coffins of eight victims of the terror attack at Friday's funerals at Ankara's Kocatepe Mosque. (AFP Photo)
by Daily Sabah Feb 20, 2016 12:00 am

Friday was a day for somber remembrance and a manhunt for the perpetrators of Wednesday's car bombing in Ankara that targeted Turkish military personnel. Prime Minister Ahmet Davutoğlu and Cabinet members laid carnations at the site of the bombing on Friday morning while funerals and commemoration ceremonies were held for the 28 victims. Meanwhile, police announced three more suspects had been detained in connection with the attack that is believed to have been carried out by a suspected militant from the People's Protection Units (YPG), the militia of the Syrian Democratic Union Party (PYD) affiliated with the PKK, which wages a brutal campaign against the Turkish state in southeastern Turkey. The number of detentions rose to 17 after the capture of 14 suspects since Tuesday. 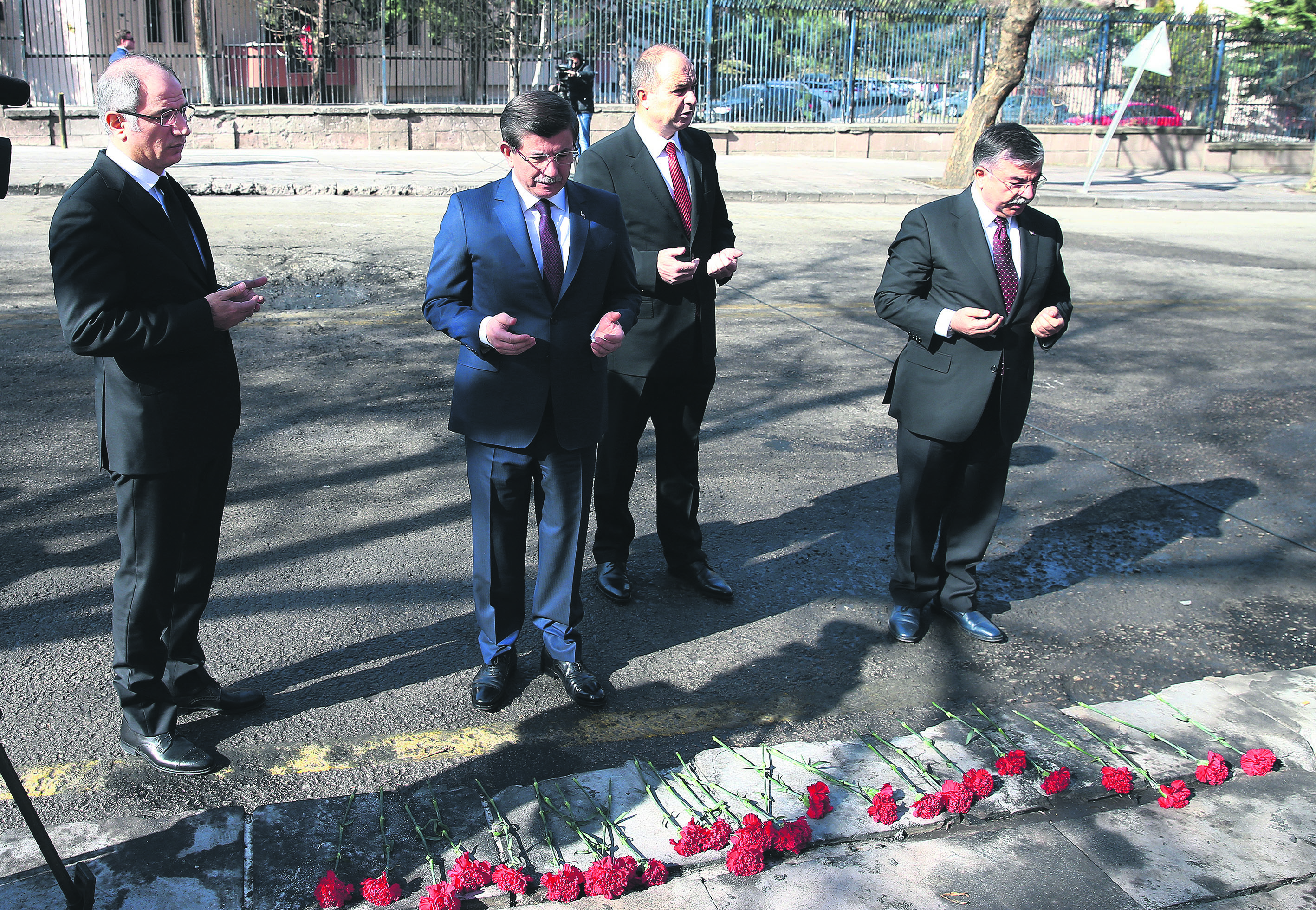 Davutoğlu first joined a military farewell ceremony at Gülhane Military Medical Academy (GATA) where the bodies of the soldiers killed and wounded were brought. Davutoğlu, flanked by Interior Minister Efkan Ala and Defense Minister İsmet Yılmaz then placed 28 carnations on a boardwalk next to a crater left by the massive explosion and recited prayers in memory of the victims. He later attended funeral prayers for six civilians and two soldiers at Ankara's Kocatepe Mosque along with ministers, army commanders and opposition Republican People's Party (CHP) Chairman Kemal Kılıçdaroğlu. Amid weeping and tears of families of the victims, a large crowd attended the funerals where coffins were draped in Turkish flags. Other victims of the attack were sent to their hometowns across Turkey for burial.

The suspect, identified as 24-year-old Saleh Nejar from Syria's Hasakah province, detonated explosives in a car near a convoy of shuttle buses carrying military and civilian personnel near the headquarters of the Turkish Army and a ministry building. Sixty-one people were also wounded in the attack. Nejar entered Turkey posing as a refugee seeking shelter. The government has said the PYD and YPG were responsible for the attack. Both have links with the PKK, a terrorist organization active in Turkey. The PKK is responsible for the deaths of more than 200 troops, police officers and civilians in the southeast where it has conducted a campaign of violence to take over predominantly Kurdish towns since last summer. Ankara Chief Prosecutor Harun Kodalak told reporters on Friday that the case is "almost solved." "We exert all efforts and the investigation is proceeding well. State officials may release a more detailed statement on the investigation soon," he said. Detentions came after operations in the cities of Adana, Bolu, Tekirdağ, İzmir, Istanbul, Ankara and Diyarbakır. State-run Anadolu Agency (AA) reported that police found evidence that the detainees might be linked to the PKK. It was revealed that the bombing was conducted with a rental car stolen by carjackers that was later sold to a man in Diyarbakır, according to reports. The car's license plates were replaced with false ones before it was loaded with explosives.
RELATED TOPICS