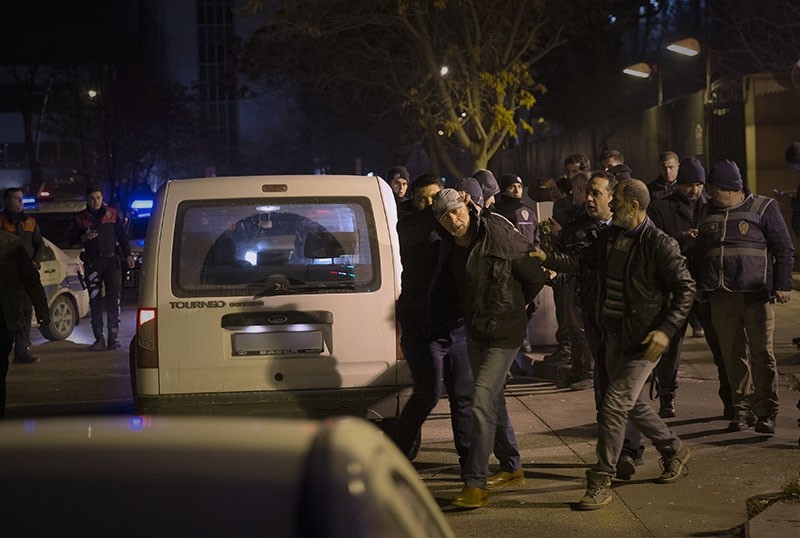 Police detain the man who opened fire into the air outside the US embassy in Ankara. (AA Photo)
by Daily Sabah with AA Dec 20, 2016 12:00 am

A man fired a few rounds of a rifle into the air in front of the American embassy early Tuesday, hours after the Russian ambassador to Turkey was assassinated in Ankara, police said. Amid the incident, the U.S. embassy in Ankara announced a one-day suspension of operations at its mission in the country.

Authorities said Şahin S. approached the embassy in Ankara's Çankaya district and fired eight to nine times with the rifle he had concealed in his coat.

He was taken into custody and an investigation is underway, according to police who said extraordinary security measures have been taken around the area.

Meanwhile, the U.S. temporarily closed down its consulates for one day in Istanbul and Adana, as well as the embassy in Ankara on Tuesday.

Russian envoy Andrey Karlov was killed at an art exhibition in the district of Çankaya earlier Monday when a gunman opened fire on the diplomat before shooting into the air, according to an Anadolu Agency correspondent who witnessed the shooting.

The Iranian Embassy in Ankara also announced yesterday that it has closed down its consulates for one day in Istanbul, Trabzon and Erzurum.

The envoy, who was delivering a speech at an opening ceremony, was taken to a hospital but was later pronounced dead.

Police special forces killed the assailant in an operation that lasted approximately 15 minutes.