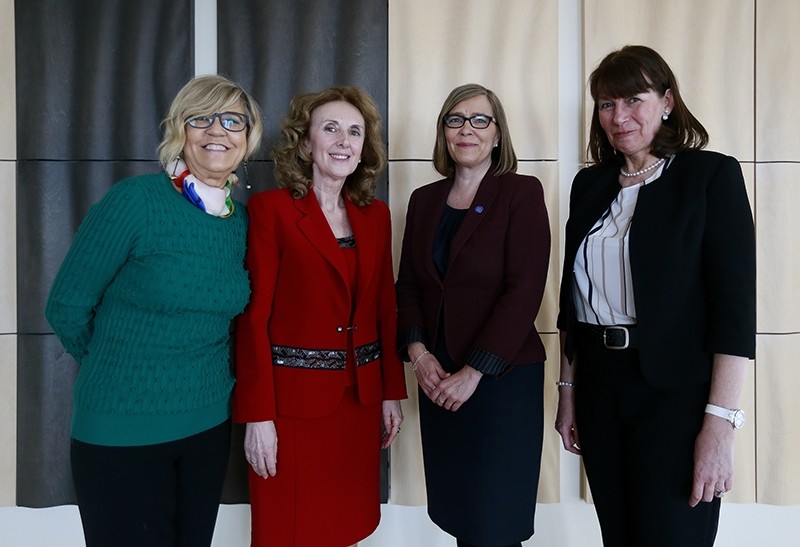 Four female ambassadors based in Ankara met this week to talk about women's issues ahead of International Women's Day on March 8.

Finnish ambassador Kairamo said that her country was celebrating the centennial of its independence but the relationship between Finland and Turkey was older than 100 years.

"I am proud to say Portugal was one of the first countries to sign the Istanbul convention," Portugal's ambassador Da Silva said referring to a Council of Europe treaty designed to end domestic violence.

Turkey was the first country to ratify the Convention, and was followed by Portugal, Albania, Italy and Montenegro.

Women's issues dominated discussions. For instance, Da Silva added that Portugal was trying to overcome the salary gap between women and men. "It still exists everywhere."

"We don't have many [women] in politics. Why is that we don't have that many women in the diplomatic service; we have a lot but less than men. For instance, [female] CEOs in companies are not so many, in the financial sector not so many.

"We have to think about why women don't have access to this. One of the reasons I would say is that of course society maybe is not promoting this sufficiently," she added.

Finnish ambassador Kairamo talked about her personal experience as a working woman. She said her family had to follow her country to country due to her job.

"When I got a job in Brussels, the whole family followed me. It was a family choice but it was based on the fact that I was offered a job. And my husband accepted it," she said.

The Portuguese ambassador said that she had never imagined to be a diplomat as a child.

"Of course it is very difficult. You have a husband who has his own job. And now they followed me. I am very happy that my husband supported me," she added.

The Finnish ambassador said: "In my country, we are very advanced in the area of women's rights but definitely not perfect. The glass ceiling is definitely there, particularly in the private sector. In political life less, because we have had a female president elected directly by the people twice."

She noted that Turkish women were "strong".

Portuguese ambassador Da Silva added: "The Turkish society is a very diversified one. Even when I came here as a tourist I realized that.

"There is this mix. Diversity is always a good thing," she added.

The Slovakian ambassador said: "The best thing is they live together. You see two young girls on the street. One has a short skirt and is modern. The other one wears a nice scarf and they go together without any problem."