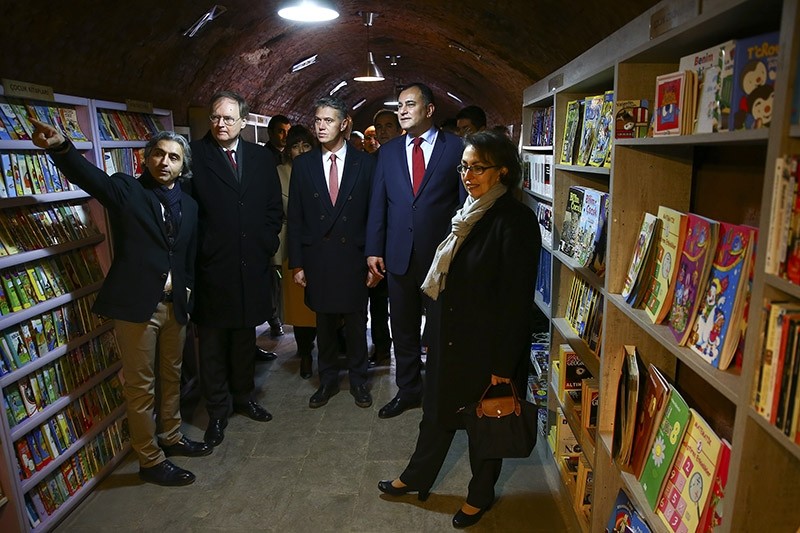 The head of the European Union (EU) delegation to Turkey on Wednesday handed over 20 boxes of books to a special library in the capital, established with books found in garbage bins.

In a visit to make a contribution to the library founded by the cleaning workers of Ankara's Çankaya district, Ambassador Christian Berger and his wife Marilena met with Çankaya Mayor Alper Taşdelen.

During the visit, Berger said they heard about the library on social media.

"The initiative was very welcomed by our staff and our colleagues in the delegation. In a very short period of time, we got to get 20 boxes of books which I hope will contribute to your library, but to the general concept of education," Berger said.

Berger noted that they belonged to a generation that has a high appreciation for books and never threw them away.

"So, we prefer to donate books," he said.

Taşdelen thanked Berger and his delegation for their contributions to the library.

Noting that the library was the first of its kind in the world, Taşdelen said, "Some of our municipality workers read Dostoevsky and Gorki during the day and collect the garbage of Çankaya at night."

Yoldaş Özer, a cleaning personnel, told Anadolu Agency that they now had the opportunity to read while resting and sipping tea.

"One of the goals of the project is to obtain a mobile library truck by which we can carry books to village schools," he said.

Earlier in January, Anadolu Agency reported this mission of garbage collectors of sorting out books from trash in the Çankaya district, the cultural and financial hub of Ankara.

In a matter of just eight months, the library has come to boast 5,000 books in 17 categories, ranging from literature to history and politics.