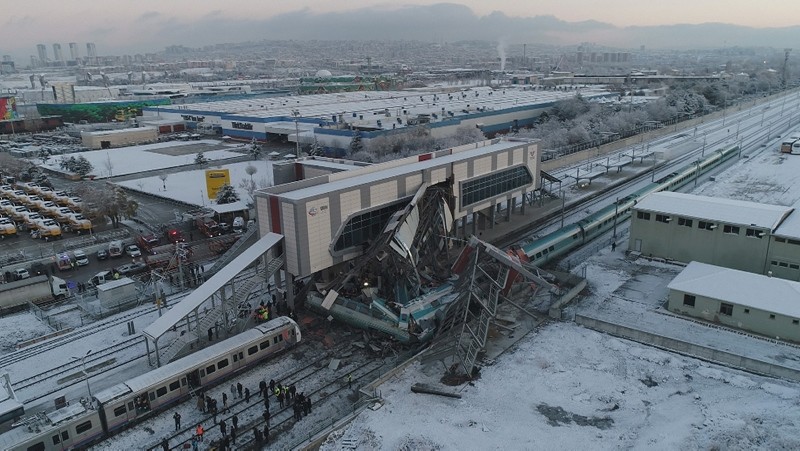 A high-speed train hit a railway engine and crashed into a pedestrian overpass at a station in the Turkish capital Ankara on Thursday, killing nine people and injuring 47 others, including three in critical condition, Transportation and Infrastructure Minister Mehmet Cahit Turhan said.

The train was en route from Ankara to the central Turkish city of Konya.

Şahin said the high-speed train crashed into an engine that was checking the tracks at the Marşandiz station in Ankara, adding that after the crash an overpass also collapsed onto some of the train cars.

The accident took place at 6:36 a.m. (0336 GMT) as the train left the central station in Ankara and collided head-on with the locomotive, which was returning from checking tracks.

"Our hope is that there are no other victims," he said.

Three train engineers - two from the express train and one in the locomotive - were among the dead, Turhan said. A fourth engineer was injured. Some of the injured were taken to a nearby hospital.

Prosecutors have launched an investigation into the crash.

President Recep Tayyip Erdoğan called Turhan and Interior Minister Soylu to receive information regarding the accident and ordered for all related departments to be mobilized.

Speaking at a meeting in Ankara, Erdoğan said that three people have been arrested in relation to the accident and vowed to find those who are responsible from the deaths of passengers and engineers.

U.K. Ambassador to Ankara Dominick Chilcott, EU Turkey Delegation head Christian Berger, the U.S and Pakistani embassies in Ankara were among the foreign delegations that offered their condolences after the accident.

Despite heavy investments to improve railways that have been neglected for decades, Turkey's railway safety record remains poor. In July, 24 people were killed and more than 120 people were injured in Çorlu district of northwestern Tekirdağ province when a passenger train derailed after the earth filling under the tracks near a culvert was washed away by heavy rains.

Last month, 15 people were injured when a passenger train collided with a freight train in Turkey's central province of Sivas.

The Ankara to Konya high-speed route was launched in 2011 and was followed in 2014 with a high-speed link between Ankara and Istanbul.

Konya, about 260 kilometers (160 miles) south of Ankara, is home to the tomb of the Sufi mystic and poet Jalaladdin Rumi, also known as Mevlana, attracting thousands of pilgrims and tourists.