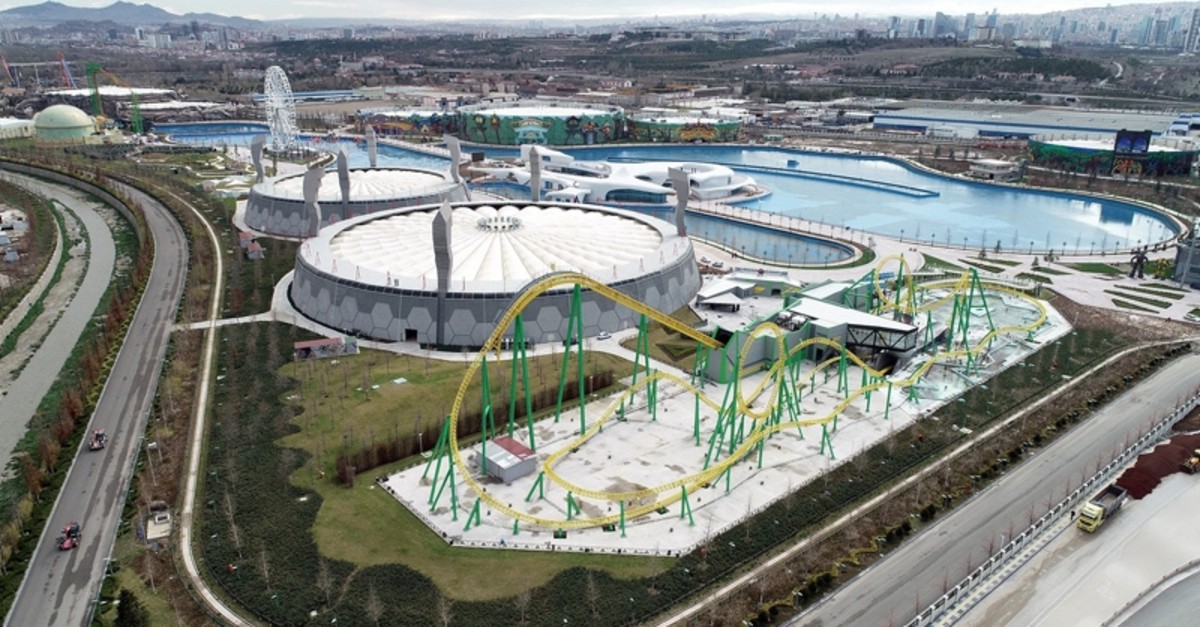 Wonderland Eurasia, dubbed the biggest theme park in Europe, was inaugurated by President Recep Tayyip Erdoğan in the capital Ankara on Wednesday and offers hundreds of rides and activities to visitors

Ankapark, as it was formerly known, was formally opened Wednesday under its new name Wonderland Eurasia. It is the largest theme park in Turkey and according to its founders, the biggest of its kind in Europe.

President Recep Tayyip Erdoğan addressed a crowd at the park, praising the venue as "one of symbols of pride for Turkey."

Built on 1.3 million square meters, the park boasts 26 large rides and 2,117 smaller rides housed in 13 huge tents and a large outdoor area. It also houses a fountain that can sprinkle water to 120 meters high, a parking lot for thousands of vehicles, a rail network of 5 kilometers long and solar panels generating power for some sections of the park located in capital's Yenimahalle district.

Erdoğan said the park, which was leased to a joint Turkish-Chinese venture by the municipality, will generate an income of TL 50 million yearly for the municipality. "It will also contribute to city's tourism with visitors from other cities and will boost Ankara's brand value. The president thanked former Ankara Mayor Melih Gökçek for the creation of the theme park.

The Ankara municipality spent TL 1.3 billion for park's construction before launching a tender for private sector to run the venue. Gökçek says it was built for a low cost compared to its foreign rivals like Disneyland.

The park was ridiculed once for its strange promotion campaign with statues of dinosaurs and robots placed along the busy roads of the capital. Animatronic dinosaurs heavily featured in yesterday's opening ceremony for the park which was brimming with visitors on the first day.

Entries will be free of charge for the park until March 31 and visitors will pay a minimum fee of TL 25 after that date. Some 5 million visitors are expected to visit Wonderland Eurasia annually. The park offers free shuttle services at pick-up points across Ankara.

Along with rides, the park boasts more than 2 million species of plants and trees dotting the venue.

A main entrance modeled after well-known ancient mosques and madrasas welcomes visitors to the park and a similar architecture is used inside the venue. The main attractions are 14 roller coasters, which park owners say have the sharpest twists in the world, a 75-meter high tower ride, the domestically-made Digital Dark Ride, a huge multidimensional theater, hologram shows and interactive animations.

A canal inside the venue gives visitors a chance to see models of landmarks from around Turkey via boat trips. Another section entitled "Dinosaur Jungle" covers some 20,000 square meters and hosts a 70-meter-long animatronic dinosaur which the park hopes to submit to the Guinness Book of Records as the largest of its kind.

Along with rides and other attractions, the park has stages and will host concerts in April and May, as well as theater plays.

On the economic side, the park will provide employment for 1,400 people and will contribute to Ankara's tourism which has been largely limited to local tourists so far. A hotel was also built near the park to address accommodation needs of visitors. The Chinese partner of two Turkish companies that run the park also plans to promote the park in China. Speaking to Anadolu Agency (AA), Cem Uzan, the manager of the park, said they expect some 500,000 Chinese tourists to visit the park and they aimed to attract tourists from Russia and Middle Eastern countries as well.