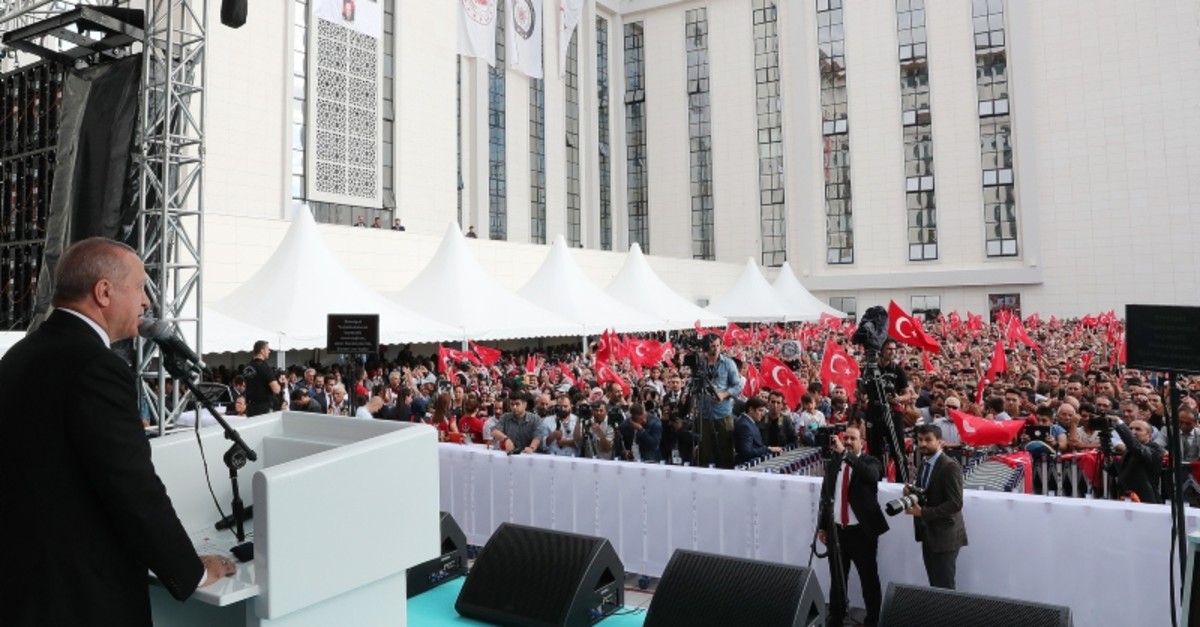 The police headquarters in capital Ankara which was bombed by the Gülenist Terror Group (FETÖ) during the failed coup attempt of July 15, 2016, was inaugurated Monday by Turkey's president after renovation works were completed.

The headquarters was reopened by President Recep Tayyip Erdoğan on the third anniversary of the coup bid.

"As long as Turkey has its soldiers, police and intelligence, no one will attempt to occupy the country again," Erdoğan said, adding that police had fought shoulder to shoulder with civilians against the coup plotters.

He stressed that noone would be able to bring Turkey to its knees as long as it had institutions to protect its democracy.

An F-16 jet used by the FETÖ members bombed the Security Directorate's Department of Aviation in the Gölbaşı district of Ankara and left seven killed and five others injured.

In the first minutes of July 16, the Security Directorate's Department of Special Operations in the same district was also bombed, killing 44 police officers and injuring 36.

Tanks and armored vehicles were also hijacked as coupists drove them on the city streets in the capital.

"On the night of July 15, the first institution targeted by the putschists was our police organization. Together with our Special Forces Command in Gölbaşı, the Ankara Police Department was subjected to heavy attacks by FETÖ scoundrels throughout the night.

"Every image that emerges, every record the putschists thought they had destroyed reminds us of the extent of the savagery that was inflicted here that night. These traitors were blinded by hatred to the point that they gave the order to 'shoot, kill, have no mercy, and fire' against their own people and colleagues," he said.

"We are taking every precaution to prevent betrayals like July 15 from happening again," Erdoğan added.

FETö and its U.S.-based leader Fetullah Gülen orchestrated the defeated coup of July 15, 2016 in Turkey, which left 251 people killed and nearly 2,200 injured.