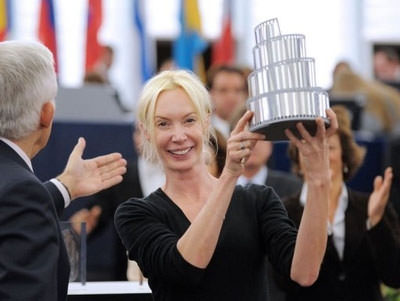 A drama about a young Turkish woman in Germany struggling to overcome her family's conservative ways Wednesday won the European Parliament prize for films exploring the continent's identity.

A drama about a young Turkish woman in Germany struggling to overcome her family's conservative ways Wednesday won the European Parliament prize for films exploring the continent's identity.

The fourth LUX Cinema Prize was awarded to rapturous applause in the 736-member assembly to German director Feo Aladag for her film "Die Fremde" ("When We Leave").

"I made Die Fremde because I believe we live in a multicultural society which can no longer rest on promoting consensus but must rather find new ways in dealing with arising divergence," Aladag said.

The winner of the prize receives 90,000 euros (120,300 dollars) from the parliament to subtitle the film in all official EU languages, adapt it for people with sight and hearing problems, and produce a 35mm print per EU state or for DVD release.

Two other films had been shortlisted for the prize: Greek-German movie "Akadimia Platonos" by Filippos Tsitos and Belgian film "Illegal" by Olivier Masset-Depasse.

The prize is given to films that "illustrate or question the founding values of European identity, explore Europe's cultural diversity or contribute insights to the EU integration debate", the parliament says.
Last Update: Jan 19, 2011 10:25 am
RELATED TOPICS