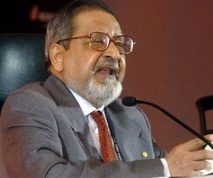 Nobel-winning writer V.S. Naipaul has pulled out from a literary event in Istanbul following protests over his critical views on Islam, organisers were quoted as saying Wednesday.

ISTANBUL (AFP) - The Turkish media has "politicised" the author's participation and "the essential goal of the event and V.S. Naipaul's contribution as an author has been overshadowed," the statement, carried by Anatolia news agency, said.

The pull-out decision was taken in mutual agreement with the author, the statement, released jointly by organisers and Naipaul's literary agent, added.

The gathering of the so-called European Writers' Parliament, scheduled to start on Thursday, is part of events marking Istanbul's status as European Capital of Culture this year, bestowed by the European Union.

Some Turkish participants had threatened to boycott the gathering if Naipaul attended, with several newspaper columnists denouncing organisers for having invited the Trinidadian writer of Indian descent, who won the Nobel Prize for literature in 2001.

Britain-based Naipaul, 78, has stirred controversy in the past, arguing that Islam both enslaved and attempted to wipe out other cultures, resulting in a "calamitous effect" on converted peoples worse than that of colonialism.

Naipaul has written two books on Islam, "Among the Believers" and "Beyond Belief", for which he travelled extensively in Muslim countries.