An ABBA wind to blow in Haliç tonight 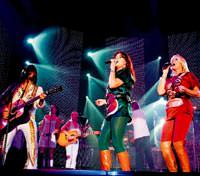 Tonight, fans will have the opportunity to hear the well-loved songs of ABBA played live in the Haliç Congress Center in a very special performance entitled 'ABBA The Show'.

Former ABBA members, guitarist Mats Sture Ronander and saxophone and flutist Ulf Anders Hilmer Andersson will be joined by a 20-person orchestra, including members of the London Symphony Orchestra to perform classic favorites such as 'Waterloo', 'Dancing Queen' and 'Money Money Money' amongst many others for fans tonight in Istanbul.

'ABBA The Show' has performed sold out shows in a number of prestigious venues including London's Royal Albert Hall and the Hollywood Bowl.

This year the performance will be touring Europe throughout the months of January and February. Fans should act fast if they want to see them tonight. Tickets are available from Biletix and range from 54 TL to 204 TL.