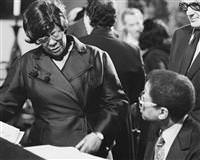 Billy Taylor, a leading jazz musician and composer who introduced the genre to wider audiences as a TV broadcaster, teacher and booster of new talent, died Tuesday in New York of heart failure, age 89.

The Kennedy Center for the performing arts in Washington, D.C., where Taylor had been the artistic director for jazz since 1994, called him "a great statesman and ambassador for jazz throughout the world."

"We are grateful for Dr. Taylor's devotion, friendship and his influence on jazz," Darrell Ayers, vice-president of education and jazz at the Kennedy Center, said in a statement.

Representatives for Taylor cited his daughter, Kim Taylor-Thompson, as saying the cause of death was heart failure.

Taylor was born in Greenville, North Carolina in 1921 and made his way to New York where he played with jazz greats Ben Webster, Miles Davis, Charlie Parker, Billie Holiday and Ella Fitzgerald among others.

He began playing professionally in 1944, and as the head of his own trio, Taylor composed over 300 songs and supported future legends such as Charles Mingus.

His song "I Wish I Knew How It Would Feel to Be Free," became an anthem for the civil rights movement. But Taylor became famous less as a performer than as one of jazz music's most vocal proponents.

On TV and radio, Taylor developed jazz programs, profiled musicians and broadcast music across the United States. He also taught jazz to people through a variety of means including grass-roots programs, and seminars at Yale University and the University of Massachusetts-Amherst, where he got his PhD and taught as a professor.

Throughout his career, Taylor was awarded the 1992 U.S. National Medal of Arts, was named a National Endowment for the Arts Jazz Master and received over 20 honorary degrees.

Taylor, who lived in Riverdale, New York, is survived by his wife, Theodora, and daughter. His son, Duane, died in 1988.