For the first time ever Cirque Du Soleil comes to Turkey 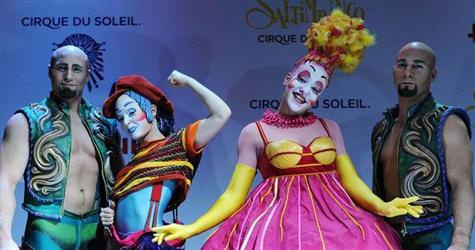 The internationally acclaimed Canadian performance troupe Cirque Du Soleil will be bringing 'Saltimbanco' to Istanbul’s Abdi İpekçi Sports Center from February 14th to March 4th. The troupe is well-known for their unique style of combining theater with acrobatics.

Known for their impeccable stage design, music, dance and costumes, the performance artists that make up the Cirque Du Soleil troupe will soon be bringing their magic to fans in Istanbul. With their style of combining modern dance and acrobatics, Cirque Du Soleil, which has taken the stage in a number of magnificent performances on the Oscars and in Las Vegas to say the least, will be bringing their 'Saltimbanco' show to Istanbul February 19th – March 4th.

Cirque Du Soleil creator Guy Laliberte summarizes the 'Saltimbanco' show as a celebration of life. With colorful characters and hypnotizing stage design, the troupe is set to sign on to an epic performance. The 51-member troupe is planning to present a theatrical performance of the likes never before seen in Turkey. The show, which at times has comedic tones and at other times can be dramatic, contains different sections in which trapeze artists, acrobats, jugglers and balancers perform in a theatrical show inspired by the 'massive metropolis,' such as Istanbul. Tickets range from 56 to 164 lira. For more info: 0216 556 98 00

Founded in 1984 with 20 street dancers, Cirque De Soleil has gone on to display nail-biting experiences for global fans. With 19 different shows worldwide running two years ago, the show destined for Istanbul, 'Saltimbanco', uses dance to describe world metropolises. The famous troupe's new show entitled 'Michael Jackson: The Immortal World Tour' commemorates the late pop star and was prepared by Jamie King, who has also worked with the likes of Madonna and Rihanna.