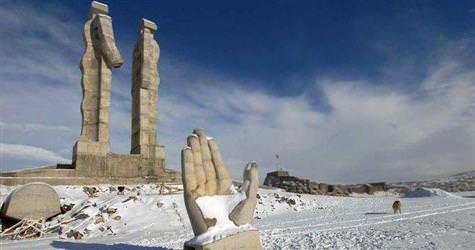 Modern art or a blight on the landscape? A giant monument to friendship between historic enemies Turkey and Armenia has become a symbol of controversy rather than healing.

Turkey's prime minister said the monument near the Armenian border is a "freak" that overshadows a nearby Islamic shrine, underscoring complex tensions in predominantly Muslim Turkey over religious piety and free expression in a society torn between the modern and the traditional.

The monument features a divided human figure, with one half extending a hand to the other half. It is meant to symbolize the pain of division and the hope of reconciliation, and was sculpted from stone by Mehmet Aksoy, a prominent Turkish artist.

"We would not show any sign of disrespect against any artist or tear down and discard his work of art," Culture Minister Ertugrul Gunay said Monday. "The theme of the monument is correct, it gives the message of friendship. But there has been a controversy over the location of it for several years."

The monument has yet to be completed, and local authorities halted its construction on grounds that it was built on a historic military site, Timur Pasha emplacement, used to defend the city in the 16th century. Newspapers published pictures of the monument with a gigantic hand, which has to be installed, sitting on the foreground.

On a weekend visit to Kars, Turkish Prime Minister Recep Tayyip Erdogan described the monument as an affront to the shrine of Hasan Harakani, one of the pioneers of Islam in the area in the 11th century.

Some hardline nationalists criticized the monument on grounds that it suggested Turkey was apologetic toward Armenia.

The 35-meter (115-feet) high monument was seen as a symbol of efforts to end a century of enmity between Turkey and Armenia.

A 2009 agreement between Turkey and Armenia, meant to open the way to diplomatic ties and the reopening of their shared border, has been dealt a setback by the conflict between Armenia and Azerbaijan over the enclave of Nagorno-Karabakh.

Turkey wants Armenian troops withdrawn from the Armenian-occupied enclave in Azerbaijan. Turkey closed the border in 1993 to protest Armenia's war with Azerbaijan, a close Muslim ally.

Aksoy's work has attracted controversy in the past. A court in 2002 ordered the mayor of Ankara, Mehmet Gokcek, to pay a symbolic fine in compensation to the artist after he had the artist's statue of a nude removed from a park in the Turkish capital for alleged obscenity in 1994. The removal sparked criticism by activists who said freedom of expression was being denied.