Orhan Pamuk’s lesson notes to be published in Italy 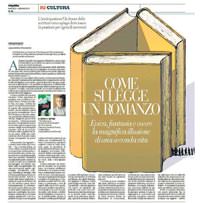 A collection of lectures given by Nobel award winning writer Orhan Pamuk for Harvard University’s Norton Lecture Series have been compiled into a book that will be released in Italy.

Italy's La Repubblica daily has already published a section of the book, entitled The Naive and The Sentimental Novelist. The article, which begins on the front page of the La Repubblica' daily has the headline (What Our Minds Do When We Read Novels). In the article, Orhan Pamuk touches upon the 'secret heart' concept in the book, in which he expresses that the novel reader tends to seek out the secret heart of the book. Pamuk also states that it is this 'heart' concept that separates novels from epic poems, medieval or adventure novels. According to Pamuk, unlike an epic, a novel can revolve around normal people and daily life which allows for the presentation of more intense characters all due to this aforementioned concept.
PERSONAL PREFERENCES
Pamuk explains that novels are three dimensional and therefore appeals to people in the modern era and in fact to all of humanity. He also shares his own personal experiences by admitting to being in a trance-like state while reading novels in his room in Istanbul from the ages of 18 to 30. According to Pamuk, novels need to be in accordance to our basic perceptions of life and should be read with this expectation.
Italy's Einaudi publishing house will be releasing the book in 2012; however İletişim Yayınları will be printing it in Turkey this year. Pamuk dedicated this book, which was first put out by Harvard University, to his Indian girlfriend Kiran Desai, also a writer.