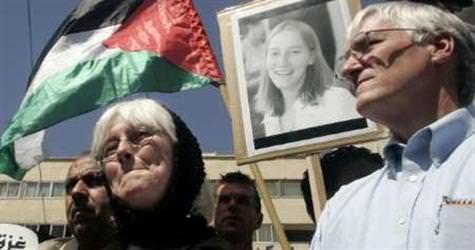 Killed in 2003 under a bulldozer in Palestine, while trying to prevent the demolition of a Palestinian family’s home, American university student Rachel Corrie’s life story will be depicted in a play debuts tonight in Turkey.

Tonight a play based on Rachel Corrie's life story and letters will be premiering in Turkey. Rachel Corrie joined the International Solidarity Movement and went to Palestine when she was still a university student. She was killed on March 16th, 2003 trying to prevent the demolition of a Palestinian family's home without resorting to violence, when she was run over by an Israeli bulldozer.
Following the young activist's tragic death that brought the entire world to morning, English actor Alan Rickman and The Guardian editor Katharina Viner collected Rachel's diary entries and travel notes to create the solo performance play entitled My Name is Rachel Corrie.
Tonight's premiere gala for the production Benim Adım Rachel Corrie directed by Turgay Kantürk, will start at 20:00 and will be held at the Muammer Karaca Theater in Istanbul. Rachel's parents, Cindy and Craig Corrie will also be in attendance.
Speaking to SABAH prior to tonight's gala, the play's translator and actress, Setenay Yener described the translation process as being long, emotional and painful. "We went over the translations numerous times. My close friends and a number of people from my family and two editors all contributed as well as the entire crew during the rehearsal process."
Yener explains that Rachel's interest in world suffering began at an early age and when she was just ten years old she delivered a speech at a Press Conference for World Hunger in which she states, "I'm here for other children. I'm here because I care. I'm here because children everywhere are suffering and because forty thousand people die each day from hunger. I'm here because those people are mostly children."
News of Rachel Corrie's death was echoed throughout the world and the play My Name is Rachel Corrie was awarded by English audiences as the best theatrical work in 2006.