Egyptians defy curfew to call for Mubarak to go 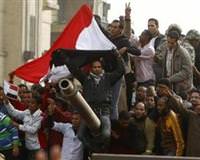 Soldiers repelled protesters who attacked a central government building in Cairo as thousands of angry Egyptians defied a curfew to push their demand that President Hosni Mubarak resign, witnesses said.

But elsewhere in the city, troops took no action as people stayed on the streets despite warnings that anyone who remained out after 4 p.m. (9 a.m. EST) would be in danger.

On the fifth day of unprecedented protests against Mubarak's 30-year-rule, it looked increasingly as if the army held the key to the nation's future.

In a move that highlighted questions over the succession ahead of a presidential election scheduled in September, Mubarak appointed veteran intelligence chief Omar Suleiman, one of the nation's most prominent figures, as his vice-president.

It is the first time the post has been filled since Mubarak himself was elevated from the vice-presidency on the assassination of his predecessor Anwar Sadat.

The president ordered troops into Cairo and other cities overnight and imposed a curfew in a bid to quell unrest in which dozens of people have been killed. In an effort to appease the protesters, he dismissed his cabinet and said he would listen to demands for reform.

The protesters, many of them young urban poor or students, are enraged over endemic poverty, corruption and unemployment as well as the lack of democracy in the most populous Arab nation.

The unrest, which follows the overthrow of Tunisian strongman Zine al-Abidine Ben Ali two weeks ago in a popular uprising, has sent shock waves through the Middle East, where other autocratic rulers may face similar challenges.

After the curfew began, hundreds of protesters attacked the entrance of a building in a suburb that is associated with the central bank. Troops fired shots in the air and the assailants fled as tanks approached.

Looting had also broken out in some areas.

But the peaceful intent of most demonstrators was evident. On the Corniche promenade alongside the River Nile in Cairo, people stayed out after the curfew deadline, standing by tanks and chatting with soldiers who took no action to disperse them.

Earlier on Saturday, several thousand people flocked to central Cairo's Tahrir Square, waving Egyptian flags and pumping their arms in the air in unison. "The people demand the president be put on trial," they chanted.

The scene contrasted with Friday, when police fired teargas and rubber bullets and protesters hurled stones in running battles. Government buildings, including the ruling party headquarters, were set alight by demonstrators.

While the police are generally feared as an instrument of repression, the army is seen as a national institution.

Middle East expert Rosemary Hollis, of London's City University, told Reuters the army had to decide whether it stood with Mubarak or the people: "It's one of those moments where as with the fall of communism in Eastern Europe they can come down to individual lieutenants and soldiers to decide whether they fire on the crowd or not."

In Alexandria, police used teargas and live ammunition against demonstrators earlier on Saturday. Protests continued in the port city after curfew, witnesses said.

Al Jazeera TV reported police opened fire on protesters trying to storm the Interior Ministry in Cairo, killing three, but the report could not be confirmed.

According to a Reuters tally, at least 74 people have been killed during the week. Medical sources said at least 1,030 people were injured in Cairo.

Clashes have also occurred in Suez, near the eastern terminal of the canal linking Europe and Asia.

Mubarak, a key U.S. ally, has held power since the 1981 assassination of Sadat by Islamist soldiers and his government still rules with emergency laws.

He promised to address Egyptians' grievances in a televised speech on Friday but made clear he intended to stay in power.

So far, the protest movement seems to have no clear leader or organization.

Prominent activist Mohamed ElBaradei, a Nobel Peace Laureate for his work with the U.N. nuclear agency, returned to Egypt from Europe to join the protests. But many Egyptians feel he has not spent enough time in the country.

In an interview with France 24 television, ElBaradei said Mubarak should step down and begin a transition of power.

"There is a consensus in Egypt in every part of society that this is a regime that is a dictatorship, that has failed to deliver on economic, social, and political fronts," he said.

The Muslim Brotherhood, an Islamist opposition group, has also stayed in the background, although several of its senior officials have been rounded up.

Protesters in Tahrir Square mocked Mubarak's sacking of his cabinet as an empty gesture.

The final straw appeared to be the prospect of elections due to be held in September. Until now few had doubted that Mubarak would remain in control or bring in a successor in the shape of his 47-year-old son Gamal. The appointment of Suleiman as vice-president raised yet more questions over the succession.

Another academic expert, Fawaz Gerges of the London School of Economics, said the protests had already changed the game in the Middle East.

"This is the Arab world's Berlin moment. The authoritarian wall has fallen, and that's regardless of whether Mubarak survives or not. It goes beyond Mubarak," he said.

"The barrier of fear has been removed. It is really the beginning of the end of the status quo in the region.

It also poses a dilemma for the United States. Mubarak, 82, has been a close ally of Washington and beneficiary of U.S. aid for decades, justifying his autocratic rule in part by citing a danger of Islamist militancy.

Egypt plays a key role in Middle East peacemaking and was the first Arab nation to sign a peace treaty with Israel.

President Barack Obama said he had spoken to Mubarak shortly after his speech on Friday and urged him to make good on his promises of reform. U.S. officials made clear that $1.5 billion in aid was at stake.

The European Union and other foreign governments appealed to Mubarak to show restraint and listen to the peoples' demands but stopped short of suggesting he should quit. Saudi Arabia's King Abdullah expressed his support for him.

Britain, Germany and other countries advised their nationals against travel to the main cities hit, a development that would harm Egypt's tourist industry, a mainstay of the economy.

Banks will be shut on Sunday as "a precaution," Central Bank Governor Hisham Ramez told Reuters.

The stock market, whose benchmark index tumbled 16 percent in two days, will also be closed on Sunday. The Egyptian pound fell to six-year lows.