Istanbul transformed into the capital of fashion 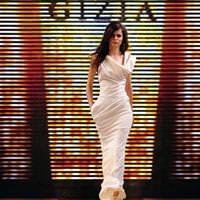 Unlike years prior, this year Istanbul Fashion Week kicked off without a grand opening ceremony yesterday and instead presented some of the most highly anticipated runway shows.

On the first day of the event, being held at Santralistanbul, Gizia, Zeynep Erdoğan, Zeynep Tosun, Niyazi Erdoğan, Giovanni Gentile, Atıl Kutoğlu and Ramsey had runway shows. However, due to the many levels of the venue, difficulties were lived by both models and invitees alike even on the first day of fashion festivities.
As always, popular Turkish model Tuğçe Kazaz kicked off the Gizia show. The extremely varied line had both evening and daytime designs spanning from floor-length gowns to tiny miniskirts. In addition, gold embroidery and silver chains were used to accessorize satin sportswear as well as evening gowns and even bags and belts.

A TRIBUTE TO THE SEVENTIES
Two of the most highly anticipated shows for the first day in Istanbul's Fashion Week were the collections of women's clothing designer and rising star Zeynep Tosun and a designer whose name has been circling in the men's fashion world, Niyazi Erdoğan.
Zeynep Erdoğan's designs stood out for their predominant salmon, brick tone and electric blue colors. Long dresses, shirt dresses, sequins and high waist pants were coupled with turban like pull-overs.
Niyazi Erdoğan's inspiring collection was reminiscent of style from the 70's in Turkey and the 'arabesque' culture yet at the same time consisted of modern street wear. Blending songs with Arabesque rifts, DJ Tutan did the music for Niyazi Erdoğan's show which only added to the atmosphere on the runway.
Zeynep Tosun, considered to be one of the best designers to show their collections last season, focused on a tough woman theme, and her collection was heavily laden with leather. Cream, black, brick, tan and dark blue were the hues to stand out in the collection, with long skirts and dresses taking starring roles. The designer's use of midriff-baring, whether it be in hooded shirts or sequined skirts and gold elements throughout the clothes and accessories also stood out.
Istanbul's fourth Fashion Week will be displaying the 2011-2012 fall and winter collections of prominent designers and ready wear brands from February 3rd to the 6th.