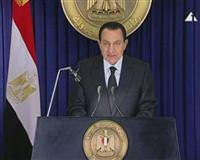 The Egyptian crisis may provide the Qatar-based satellite news channel Al Jazeera its best chance yet to capture a larger share of the U.S. audience.

Much as CNN capitalized on its coverage of the 1990-91 Gulf War, Al Jazeera English has won praise for its on-the-spot reporting and context about the protests. It will be talking to U.S. cable operators about deals "in the coming days and weeks," Anstey said in a telephone interview from Qatar.

"Many people are switching us on in the United States for the first time, thereby increasing the pressure on the operators to actually put us out onto people's TVs," he said.

Al Jazeera, not carried in most U.S. cable and satellite television markets, has a reputation for being anti-American but has also come under fire from Arab states since its inception in 1996.

Egypt ordered Al Jazeera to shut down its operations there and Al Jazeera has had its signal cut. Its correspondents are barred from several Arab states and it has mesmerized Arab viewers who once had little choice but state TV.

Meanwhile, the channel has experienced a surge in its U.S. online audience. By Friday its website's live feed had been seen by 9.4 million viewers, Al Jazeera said. Of those, 3.5 million viewers were in the United States.

Lacking a major TV distribution deal in America, the channel has focused on web distribution.

The full 24-hour channel of Al-Jazeera English is only offered in three U.S. TV markets, the largest being Washington D.C through Comcast, Verizon FiOS and Cox, to a possible audience of 2.4 million, said a spokeswoman for Al Jazeera.

Since January 28, traffic to its website has spiked about 1,000 percent, with about half that audience of U.S. origin.

Al Jazeera was barred in Tunisia before its acclaimed coverage of the revolt that toppled Zine al-Abidine Ben Ali. Now its Egypt coverage could mark another turning point.

"Al Jazeera has probably achieved a revolution in its perception in the United States through its coverage of Egypt," said Marc Lynch, professor of Middle East Studies at George Washington University.

But he said some distributors "will probably always be suspicious or at least fearful of a backlash on carrying it."

Maureen Huff, a spokeswoman for Timer Warner Cable, one of the largest U.S. cable companies, said it was "willing to talk" about carrying Al-Jazeera English and was not afraid of a backlash.

Some experts say the American public could benefit from an outsider view considering cable news is dominated by domestic coverage. "Al-Jazeera English is a channel we need badly in the United States," said Erik Nisbet, professor of communication at Ohio State University.

Before its coverage of the Egyptian demonstrations, the channel had 60,000 followers on Twitter. It now has nearly 180,000, said Mohamed Nanabhay, head of online services at Al Jazeera English.

"This has shown that Americans do care about foreign news and international affairs," he said. "The huge interest in Egypt and in Tunisia, it has really blown that myth away."