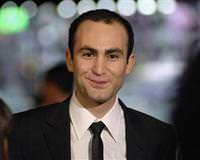 Egypt's cultural glitterati have joined thousands of protesters from all walks of life calling for an immediate end to President Hosni Mubarak 30-year-rule.

Khalid Abdalla, a British-Egyptian actor known for his lead role in the 2007 adaptation of Khaled Hosseini's "The Kite Runner," was among the crowd on Cairo's Tahrir (Liberation) square on Saturday.

"I'm here because I'm asking for Mubarak to step down," Abdalla, 30, told Reuters. "I've been here since Friday before last."

Mubarak has pledged to stay on until the end of his term in September, but protesters mounted pressure on him to leave now as they gathered on the square for a 12th day of protests.

As demonstrations continued, an Egyptian army commander was shouted down when he tried to persuade thousands of demonstrators to stop the protest that has stalled economic life in the capital.

Khaled Youssef, director of films critical of the government, was another prominent face among the protesters.

"The Brotherhood are here in Tahrir, so what?" he said of the opposition Muslim Brotherhood group.

"They are part of this nation -- everyone is here. When citizens desire life, fate must respond."

The celebrated blind Egyptian composer Ammar El Shrei, who was guided by supporters through the throngs of demonstrators, was also among those who rallied on the square.

Abdalla denounced what he said was the intimidation of the international media and "brazen lies" by state media channels trying to weaken the protest movements.

"I think with or without Mubarak, the next six months will be complicated, and I think we're better off without him," he said. "The popular will here for social justice, political freedoms and political reform is now unstoppable whether it's here in Tahrir Square or it's moved out for other reasons."