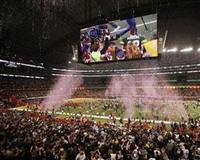 The Green Bay Packers' 31-25 victory over the Pittsburgh Steelers in Texas drew a U.S. TV audience of 111 million, topping the 2010 final tally by almost 5 million, according to data released on Monday by broadcaster Fox.

Last year, 106.5 million watched the New Orleans Saints beat the Indianapolis Colts, surpassing the 106 million who tuned in for the finale of the comedy "M*A*S*H" in 1983.

"We're excited about the fan reaction from last night and the incredible game they were able to see," NFL Commissioner Roger Goodell told reporters on Monday.

The growth in the Super Bowl's audience illustrates why advertisers pay up to $3 million for a 30-second commercial during the game.

The final numbers for this year's Super Bowl capped a strong year for the U.S. sports league. The NFL's 2010 regular season games were watched by a record 207.7 million unique viewers, according to research firm Nielsen.

The most-watched moment of this year's Super Bowl was Pittsburgh quarterback Ben Roethlisberger's last incomplete pass in the final minute, clinching the victory for the Packers, according to digital video recorder maker TiVo.

The Super Bowl's drawing power also was seen in the ratings for musical comedy "Glee," which drew 26.8 million viewers -- more than double its normal TV audience -- for a special episode that aired immediately after the NFL game.