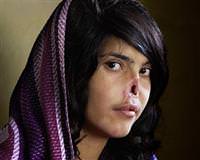 A shocking portrait of an Afghan woman whose ears and nose were sliced off by her husband as punishment for leaving him, taken by Jodi Bieber for Time magazine, won the top World Press Photo prize on Friday.

Bibi Aisha, an 18-year-old woman from Oruzgan province in Afghanistan, left her husband complaining of domestic violence. A Taliban commander ordered that she face justice and her husband cut off her nose and ears. She now lives in the United States where she had reconstructive surgery.

"It's an incredibly strong image. It sends out an enormously powerful message to the world, about the 50 percent of the population that are women, so many of whom still live in miserable conditions, suffering violence. It is strong because the woman looks so dignified, iconic," said Ruth Eichhorn, one of the judges, in a statement. Reuters photographers won two first prizes in the annual contest.

Mike Hutchings of Reuters won first prize in the Sports Singles category for his photograph from the World Cup semi-final in Cape Town, South Africa, showing the Netherlands' Demy de Zeeuw being kicked in the face by Uruguay's Martin Caceres.

Omar Feisal of Reuters won first prize in the Daily Life Singles category for his photograph of a man carrying a shark through the streets of Mogadishu, Somalia.

Andrew Biraj of Reuters won third prize in the same category for his photo of an overcrowded train in Dhaka, Bangladesh.