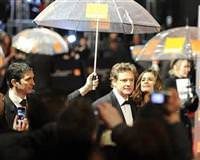 The royal biopic, which won awards for best film, best actor and best supporting actor and actress, also leads the field at the Academy Awards with 12 nominations.

It had been nominated for 14 BAFTAs, ahead of ballet drama "Black Swan" and "Inception," starring Leonardo DiCaprio.

Hooper said reports that Britain's Queen Elizabeth approved of the film and found it moving were particularly gratifying.

"The fact that it appears to have a seal of approval means a huge amount to me and Colin."

Firth picked up his second BAFTA best actor award in two years after winning the prize for "A Single Man" last year.

"This thing has run away with us all, we're all astonished," he said.

Firth has already won best actor at the Screen Actors Guild awards, the Golden Globes and the Critics' Choice Movie Awards for his portrayal of the current British monarch's father. He is nominated for best actor at the February 27 Oscars.

David Fincher won the best director award for "The Social Network," which tells the tale of the founding of the Facebook website. The film, which has been one of the most tipped for Oscar glory, also won the award for best adapted screenplay.

Best actor nominee Jesse Eisenberg picked up the award on Fincher's behalf as he was unable to attend due to filming.

The BAFTAs tend to lean toward British talent more than the Oscars, and they are a far-from-perfect barometer of what happens at the Academy Awards.

But the scale of the success of "The King's Speech" has been noted by the industry as well as the media.

Natalie Portman won the best actress award for Black Swan, the only award the film picked up out of 12 nominations. The film's director Darren Aronofsky picked up the award for the pregnant actress who did not attend the awards ceremony.

Inception actor Tom Hardy won the Orange Rising Star prize, which is decided by the British public unlike the other awards. The best foreign film went to "The Girl with the Dragon Tattoo" whose Swedish version is an adaptation of Stieg Larsson's best-selling novel.

The Harry Potter films picked up the award for outstanding British contribution.

"It's very strange to look back after seven films and remember how wary I was of letting anyone put Harry on the big screen," Harry Potter author JK Rowling said.

"...Being involved in these films has been one of the best experiences of my life."