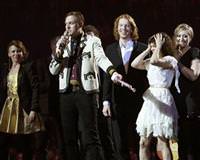 Canadian indie rock band Arcade Fire stole the show at Britain's answer to the Grammys on Tuesday, grabbing two awards at a revamped event aimed at better reflecting the changing face of the music industry.

Arcade Fire, surprise winners of a Grammy this month and still regarded by many as an underground act, won awards for best international group and best international album for their critically acclaimed LP 'The Suburbs' at the BRIT awards.

"We're called Arcade Fire -- check it out on Google," the band's lead singer Win Butler said. The event, long written off by critics as an industry back-scratching event, featured blistering acoustic performances by UK singer Adele and folk act Mumford & Sons but also gave the usual nod to mainstream artists such as Rihanna and man band Take That.

Rapid changes in the way audiences listen to and buy music in recent years have forced a rethink at the heart of the industry, giving a bigger platform to home-grown talents which rise to the top without huge major label investment.

Mumford & Sons received the coveted album of the year award for 'Sigh No More', beating Take That and Tinie Tempah in a shock choice for an event that tends to reward sales over quality.

The audience, stuffed with music industry executives, artists and hangers on, also enjoyed an explosive medley from Tempah, arguably the last year's most memorable mainstream artist, who grabbed two awards on the night.

In the running for four gongs, the south London rapper, responsible for tracks such as 'Pass Out', received the breakthrough and best single awards.

Plan B's album, 'The Defamation of Strickland Banks', has been a slow burning success story, catapulting him from underground rapper to radio star over the last 12 months.

Man band Take That, who opened the show with a troop of dancers dressed as riot police in a nod to recent student protests over higher tuition fees, won best British group.

Jessie J, the latest British pop artist to hit number one, won the critics' choice award while Cee Lo Green grabbed best international male solo artist and closed the ceremony with a fireworks-enhanced performance of his hit single 'Forget you'.