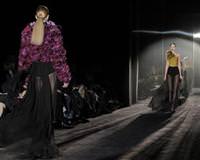 Milan fashion week will try to tune out the British royal wedding buzz and tune in to the average shopper as it kicks off on Wednesday.

Aiming to bring catwalk collections closer to the high-street customer, fashion names such as Roberto Cavalli and Frankie Morello will strut their creations in public venues, including a transparent hall built in the central Duomo cathedral square to the delight of tourists.

"One of our goals was to make fashion a more public event. People will be able to see what happens in the Duomo square," Mario Boselli, president of Italy's National Chamber of Fashion told reporters last week.

After branding a sleek yacht last year, Gucci will unveil on Wednesday a version of the Fiat 500 city car, also known as the Italian "people's car."

Unlike London, where the buzz about the April 29 wedding of Kate Middleton and Britain's Prince William added a little frisson to the fashion season, Milan has been striving to woo money-conscious customers with traditional star-studded events.

One of the big four fashion fixtures alongside New York and Paris, Milan Fashion Week spreads both top names and newcomers over 70 catwalk shows running until March 1.

Milan's fashion for the people movement reflects a trend seen among top brands such as Valentino, which launched a capsule collection for the U.S. clothing retailer Gap last year and Burberry, which streamed its catwalk show in London live to its shops and a billboard in London's Picadilly Square.

Businesstalk behind the catwalks will focus, as always, on Italian fashion houses Prada and Moncler and their plans to float on the stock exchange this year.