A film to unite women 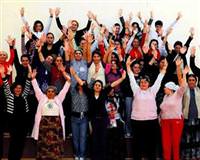 Journalist Tuluhan Tekelioğlu's documentary covering forty women in their forties, will be showed in 81 provinces throughout Turkey on March 8th International Women’s Day. According to Tekelioğlu, women will see themselves in the film.

Sabah writer Tuluhan Tekelioğlu embarked upon the documentary project 40'ında 40 Kadın, (40 women in their 40'ties) when she turned 38 and asked herself the question, "Are other women going through what I am?" It took over one year to shoot the documentary, which depicts the happy, sad and sometimes painful stories of forty women at the age of forty.
The women depicted in the documentary are from varying socio-economic groups. There is Ceni Kanditan, a preschool teacher, nurse Semiye Erel, cleaning lady Nurten Kalkan, manicurist Mayram Kabe, chef Semen Öner and former model Ebru Ürün to name a few. In the documentary, these forty women share with Tuluhan Tekelioğlu their life stories and pain with sincerity.
The decision to release the documentary nationwide surfaced after Tekelioglu showed the film at the Sincan Women's Penitentiary. Explaining that it was extremely meaningful to watch the film with the women there, Tekelioğlu states; "There were a number of very different women that had been brought together. Some had killed their husband, some had committed fraud… We were very well received which led to my wanting the documentary to run in 40 provinces. When I went to the TOBB Women Entrepreneurs Board Chairman Aynur Bektaş with the project, she told me that she could get the film out to 81 provinces, which resulted in the decision to show the documentary throughout Turkey.
According to Tekelioğlu, the documentary also shows women how they can change their lives if they choose to. "I want this film to reach 40 thousand or even four million women, because women will be able to see themselves in this film. Some of the women struggle with the difficulties of having children, and some explain the problems they have with their husbands. Therefore, there is something every woman can relate to in the film. One could say that for those that are able to see it, this film explains the courage it takes for a woman to change her life." All showings this March 8th will be free. The documentary will also be broadcasted on İz Tv on the same day, For more information on the times and locations of showings, visit: www.tobb.org.tr, www.acev.org

One showing in Lefkosia
In addition to being shown in 81 provinces throughout Turkey on March 8th International Women's Day, the documentary will also be shown in Lefkosia, the capital of Northern Cyprus.