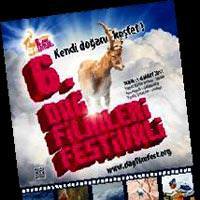 The festival, which continues until March 6th, opens with a USA film directed by Jason Burlage, which won the top prize at Canada's Mountain Film Festival, Vatanım/Mi Chacra.
Turkey's first-ever mountain film festival has 21 national and 18 foreign films, totaling 39 to be shown in six different categories.
Film showings will be held at the French Cultural Center, Galatasaray Aynalıgeçit and the Harbiye Pusula Art House. For more info: www.dagfilmfest.org