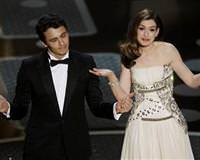 But the efforts of James Franco and Anne Hathaway fell largely flat, according to early reviews of their first stint as Oscar hosts.

The New York Times said that "the prolonged effort to pander to younger viewers was downright painful" at times, while the Boston Herald remarked sourly that "references to the Internet, apps and Facebook do not make a show trendy, or alas, entertaining."

Entertainment Weekly, however, said that Hathaway, 28, and Franco, 32, were "marvelous Oscar hosts" calling them "funny, poised, relaxed, and smart."

Producers of the Oscar telecast had been hoping that the duo might lure younger viewers who have increasingly tuned out the Oscars in recent years.

"Anne, I must say, you look so beautiful and so hip," Franco deadpanned as show opened.

"Oh, thank you, James," said Hathaway, the youngest host in Oscar history. "You look very appealing to a younger demographic as well."

Early in the show, presenter Justin Timberlake, appeared to use a smart-phone app to illuminate a "Shrek" backdrop to introduce awards for animated films.

But the show hardly turned its back on Hollywood of yesteryear. Kirk Douglas, 94, his speech badly slurred from a stroke 15 years ago, shuffled on stage with a cane to present the Oscar for best supporting actress to Melissa Leo for "The Fighter."

Douglas alluded to the Oscar generation gap in complimenting Hathaway on her looks.

"She's gorgeous," he said as the young actress blew him kisses. "Where were you when I was making pictures?"

The night's Oscar winner for best original screenplay, David Seidler, 73, for "The King's Speech," said he was the oldest person ever to claim that award.

The program frequently conjured up images and music from Oscar-winning film blockbusters of yore, from "Gone with the Wind" to "Star Wars" and "Titanic."

In one of night's biggest nods to Hollywood's older set, actor-comedian Billy Crystal, an eight-time Academy Awards host widely hailed as one of the best, made a surprise appearance to introduce a salute to the first televised Oscars in 1953, and its master of ceremonies, the late Bob Hope.

Harkening back to an era that predated the birth of many of the stars who filled the Kodak Theater on Sunday, Crystal said he was just 5 years old then.

A clip of that historic telecast showed Hope -- who presided over more Oscars than anyone, 18 in all -- opening the show that year with the now-famous line, "Welcome to the Academy Awards, or as it's known at my house, Passover."