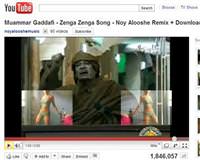 "Zenga Zenga," created by Tel Aviv music journalist and blogger Noy Alooshe, shows Gaddafi in repetitious sequences banging his fist on a podium and raising it defiantly during a speech he made last week.

The modified music of "Hey Baby," a song by U.S. rappers Pitbull and T-Pain, blasts from the video, but words from Gaddafi's address have replaced the lyrics.

The Arabic word "zenga," which Libyans use for small neighborhood, stood out for Alooshe, who does not speak the language, and he made it the recurring theme of the clip (here).

"When I saw Gaddafi speaking it struck me that his cadence and his movements were perfect for a clip. It was so musical," Alooshe told Reuters in a telephone interview.

His original two-minute video shows a gyrating female dancer in skimpy olive-green underwear -- a homage, he said, to Gaddafi's famed female bodyguards -- either side of the Libyan leader as he delivers his speech.

Alooshe said the clip had registered about 1.8 million views early on Tuesday and that he also created a version without the dancer after being told by some viewers the video was too risque.

He said he had received positive feedback on his Facebook page and by email from many viewers in Arab countries, even after they discovered from his details on the social networking site that he was Israeli.

"Of course there were those who hurled the usual abuse and I was even branded a Mossad spy, but I have many friend requests pending for my Facebook page," he said.

Alooshe said he believed the popularity of the clip was proof that social networking sites were playing an influential role in the current political upheaval in the Arab world, which has seen leaders ousted in Tunisia and Egypt by popular movements.

The clip elicited hundreds of comments on the YouTube page, one of which, posted by "bhamdan11" read: "Great clip, I just hope one day we? can overthrow all of our dictators and live free."