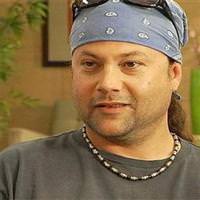 Former Alice in Chains bass player Mike Starr, who went public with his drug problems on the reality TV show "Celebrity Rehab," was found dead in a Salt Lake City house, police said on Tuesday, nine years after the rock band's singer died of an overdose. Starr was 44.

A spokesman for the Salt Lake City Police Dept. said officers responded to a call about a possible body at a residence southwest of downtown earlier in the afternoon.

"There is nothing to indicate that this was foul play by another individual," the spokesman said.

He did not have any information about the state of Starr's body, or who made the call. The medical examiner's office will likely conduct an autopsy on Wednesday, but the results of toxicology tests could take up to two months.

Starr was fired from the band shortly after the release of its breakthrough 1992 album "Dirt," which was packed with drug-related songs. In 1994, he was sentenced to 90 days in a Texas jail for stealing a piece of luggage at the Houston Intercontinental Airport.

His former bandmates meanwhile, with replacement Mike Inez on board, enjoyed even greater success at the helm of the Seattle "grunge" movement. But singer Layne Staley's drug battles put the brakes on the band in 1996. His decomposed body was found in a Seattle apartment in April 2002.

Starr was possibly the last person to see Staley alive, and admitted to feeling deep guilt about not calling 911 after a sick Staley had warned him against it.

"I wish I hadn't been high on benzodiazepine (an anti-anxiety sedative). I wouldn't have just walked out the door," a tearful Starr said last year on "Celebrity Rehab," a VH1 reality show hosted by addiction medicine specialist Dr. Drew Pinsky.

Starr said later on Pinsky's syndicated "Loveline" radio show that he felt "naked without Layne in this life. Still to this day, I don't care ... about them dismissing me from the band. I love Layne for the human being that he is. I just really miss him."

Starr was unable to beat his demons despite the rehab stint. He was arrested in Salt Lake City three weeks ago on an outstanding warrant related to an earlier drugs charge, and was also carrying unauthorized prescription medications.

The band's surviving original members, guitarist Jerry Cantrell and drummer Sean Kinney, said in a statement they were mourning the loss of their friend and requested privacy. Alice in Chains has reunited with some success in recent years with new singer/guitarist William DuVall.

Pinsky said on Twitter: "Devastating to hear of Mike Starr succumbing to his illness. So very sad. Our prayers are with his family."

TMZ, which broke the news of Starr's death, quoted his father as saying, "It's a terrible shock and tragedy."