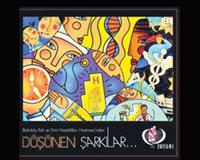 A new collaborative album entitled Düşünen Şarkılar (Thinking Songs) presents lyrics written by schizophrenic patients which have been put to music by a variety of artists. The album has invoked an interest in poetry for the patients.

Known for its statue of Rodin's The Thinker, it seems the Bakırköy Prof. Dr. Mazhar Osman Mental Health and Neurological Disorders Hospital with their new project Düşünen Şarkılar (Thinking Songs) will be inspiring us all to think for awhile.
An album to be released in the upcoming weeks presents lyrics written exclusively by patients that have received treatment or are currently receiving treatment for schizophrenia. In addition to the album's lyrics, two of the compositions were also composed entirely by schizophrenic patients.
The songs written by patients at the Bakırköy Prof. Dr. Mazhar Osman Mental Health and Neurological Disorders Hospital were performed on the album by volunteering musicians Teoman, Ahmet Özhan, Demet Sağıroğlu, Soner Arıca, Betül Demir, Mercan and Rashit Grubu.
The proceeds from the album will be donated to the Bakırköy Mental Hospital Foundation to help with treatment.
The album, produced by Hakan Eren, was prepared by psychiatry specialist Dr. Vedat Bilgiç and music teacher Volkan Uruk. The aim of this project, which is aimed at being a social responsibility, is to lift the prejudices of mental illness patients and especially schizophrenics prevalent in society.
The lyrics cover a number of subjects ranging from electro shock treatment to smoking addiction and loneliness. According to Dr. Vedat Bilgiç, "We have a unit in the hospital where patients focus on writing poetry, music, handcrafts and other activities such as ceramics. We heard that some patients were writing songs and poetry and we decided to turn them into songs we would then give to them as gifts. The project continued to grow and in the end we had famous musicians involved."
Recalling how they played the album when it was finished for the patients, Bilgiç says, "They were really happy and emotional. Now, patients are constantly giving us poems…"