Puppet festival kicks off in Büyükçekmece 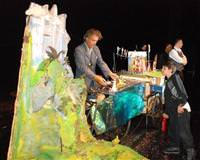 This year’s International Puppet Festival held in Büyükçekmece kicked off with a gala on Thursday attended by a number of master puppeteers.

The gala, which was held at the Atatürk Cultural Center, was attended by Büyükçekmece Municipal Mayor Hasan Akgün, who expressed how extremely pleased he was that all ages of members of the public from throughout the city have been coming out to the festival. Mayor Akgün states, "The art of puppetry is both entertaining and educational and does not involve cursing or slang."

The International Puppet Festival runs from March 9th to March 13th and hosts 14 artists who will be performing 11 shows. The puppeteers presenting at the festival are from Bulgaria, Russia, USA, France and Turkey.