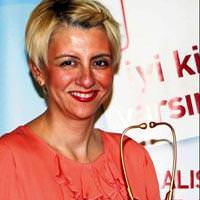 Sabah Newspaper Health Editor Esra Tüzün has been awarded a Golden Stethoscope award for being the sole health editor in the written press.