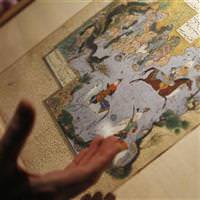 An illustrated page from a rare 500-year-old manuscript detailing the early history of Persia is expected to sell for as much as $5 million when it auctioned for the first time in London next month.

The exquisitely detailed work is one of 258 miniatures from the Shahnamah of Shah Tahmasp of Persia, or "Book of Kings."

It is the highlight of a one-week exhibit at Sotheby's opening on Friday in New York and the top item in the London sale on April 6 of the collection of Stuart Cary Welch, a former curator of Islamic art at the Metropolitan Museum of Art in New York.

"It is arguably the greatest illustrated manuscript ever produced, in any culture," said Edward Gibbs, head of Sotheby's Middle East art department.

The manuscript, done between 1525-1535, chronicles the history of Persia, or Iran, from prehistoric times to the 7th century.

Made for Shah Tahmasp, it was commissioned by his father, the founder of the Safavid dynasty. The work depicts King Faridun's transformation into a dragon to test his three sons' loyalty.

Other pages from the manuscript hang on the walls of museums in Tehran, Berlin, Doha and New York's Metropolitan Museum of Art.

The leaf is one of the few remaining in private hands, Gibbs said, and the first to come to market since 2005.

Previous owners included the kings of Persia and Iran and Barons Edmund and Maurice de Rothschild. Welch acquired the work in 1977 and wrote on the frame's backboard, "Amazed by its quality."

He described it as the costliest acquisition he had ever made.

Gibbs said Welch "had an exceptional eye for quality, refinement and rarity."

He added that although Islamic art is a niche market, it has expanded since the Shah of Iran began collecting in the 1970s. During the 1990s demand for Islamic art grew with the addition of collectors from the Middle East, in particular the Gulf region.

The market, he said, was being driven by buyers and collectors in the Middle East, Turkey, Europe, Japan and institutions in the Far East and Singapore.

Other highlights of the Welch exhibition include a ruby-set 16th-century ceremonial dagger, which has never been exhibited before, and a 650-year-old highly detailed, multiple-figured Nepalese painting, "Vasudhara Mandala," signed by the artist Jasaraja Jirila, which will be auctioned in London on May 31.