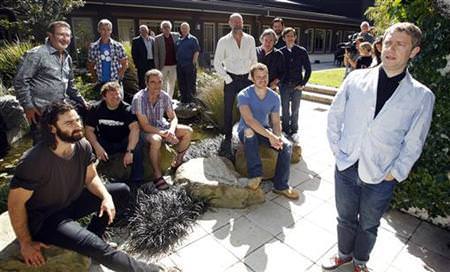 Filming began on Monday on the long-awaited "Hobbit" movies, ending years of delay due to funding problems and a labor dispute which nearly saw the project shifted out of New Zealand.

The two films are being directed by New Zealand native Peter Jackson, 49, who made the hit Oscar-winning "Lord of the Rings" trilogy.

Filming will take place at Stone Street Studios in Wellington and at a number of locations around New Zealand, with the exact whereabouts a closely guarded secret. The first of the two movies will be released in December 2012 and the second is expected a year later. The movies have been beset by a succession of problems, most notably the threat last year by Time Warner Inc unit Warner Bros. to move production overseas because of fears unions would impose a boycott to back demands for a collective contract. The government last year changed labor laws to keep the estimated $500 million production and increased tax breaks for Warner Bros, citing the damage that might be done to the country's small film industry. Before that, issues around the funding of the films saw original director Guillermo Del Toro quit in 2010.

The final challenge came from Jackson's hospitalization earlier this year for emergency surgery for a perforated ulcer.

"The Hobbit" is based on the adventures of Bilbo Baggins, a hobbit who lives in the land of Middle-earth and goes on a quest to find treasure guarded by a dragon. The book, first published in 1937, is the precursor to the "Lord of the Rings" trilogy, which also takes place in Middle-earth. The cast for the movies includes Oscar winner Cate Blanchett, Ian McKellen, Orlando Bloom, Ken Stott and Martin Freeman as Bilbo Baggins.