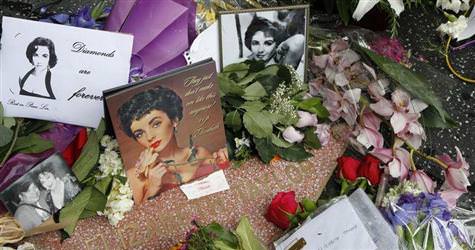 The star of "Cleopatra" and "Who's Afraid of Virginia Woolf?" died at Cedars-Sinai Medical Center in Los Angeles surrounded by family after a long battle with congestive heart failure that sent her to the hospital six weeks ago.

In a career spanning seven decades, Taylor first gained fame in 1944's "National Velvet" at age 12 and was nominated for five Oscars. She won the best actress award for "Butterfield 8" (1960) and "Who's Afraid of Virginia Woolf?" (1966) with actor Richard Burton, whom she would marry twice.

Taylor's eight marriages, health problems, prescription drug addiction and ballooning weight often overshadowed her career, but she overcame adversity and used her fame to advocate for causes such as AIDS education and research.

Her death triggered an outpouring of tributes from Hollywood luminaries like Barbra Streisand, recording stars such as Elton John and politicians including former president Bill Clinton and Secretary of State Hillary Clinton.

Speaking for her family was her son, Michael Wilding, who called his mother, "an extraordinary woman who lived life to the fullest, with great passion, humor, and love."

"It wasn't just her beauty or her stardom. It was her humanitarianism. She put a face on HIV/AIDS," Streisand said. John called her "a Hollywood giant" and an incredible human being.

In a joint statement, the Clintons called her "thoroughly American royalty."

Taylor was born on February 27, 1932, in London to American parents. She moved to the United States as a child and soon after her 10th birthday landed the lead in the 1942 film "Lassie Come Home," followed by her turn as a young girl who tames the fury of a wild horse in "National Velvet."

She confirmed her star power in 1958 in Tennessee Williams' "Cat on a Hot Tin Roof" and cemented her reputation as among the greatest actresses of her generation playing a foul-mouthed alcoholic in "Who's Afraid of Virginia Woolf?"

She continued working through the 1970s, '80s and '90s, taking a variety of roles in movies and on television. In 1992, the Academy of Motion Picture Arts and Sciences gave her its humanitarian honor. Her last movie was the 1994 live action comedy "The Flintstones."

But Taylor's fame went far beyond her screen life. After marriages to hotel magnate Conrad Hilton, British actor Michael Wilding and film producer Mike Todd, she found herself in a scandalous love triangle with singer Eddie Fisher and his wife actress Debbie Reynolds, before marrying Fisher.

Reynolds, 78, was gracious in remembering Taylor on Wednesday, calling her career long and productive and saying "no one else could equal Elizabeth's beauty and sexuality."

While filming the lavish "Cleopatra", at the time the most expensive movie ever made, in Rome in 1961, Taylor started a torrid affair with her married co-star Burton. The pair first wed in 1964 and Burton lavished her with furs and diamonds, including a $1 million pear-shaped jewel.

But the actors were as famous for their tempestuous relationship as they were for their love. They divorced in 1974, only to remarry in 1975 and divorce again in 1976.

"We enjoy fighting," Taylor once said. "Having an out-and-out, outrageous, ridiculous fight is one of the greatest exercises in marital togetherness."

She also married U.S. Senator John Warner and construction worker Larry Fortensky. "She was my 'partner' in laying the foundation for 30 years of public service in the U.S. Senate," Warner said. "We were always friends -- to the end.

As she grew older, the Hollywood legend began drinking heavily and grew addicted to prescription drugs. Her weight ballooned and she was lampooned by comedians. In 1983 she entered the Betty Ford Center in California for treatment.

Yet, she overcame those problems, and when her friend Rock Hudson died of AIDS in 1985 she began a crusade to raise awareness and money to treat the deadly disease.

"She was among the first to speak out on behalf of people living with HIV when others reacted with fear and often outright hostility," said The American Foundation for AIDS Research, of which Taylor was founding national chairman.

In May 2000, Taylor received the title "Dame," the female equivalent of a knighthood, from Queen Elizabeth.

When her friend Michael Jackson was tried and acquitted on child molestation charges in 2005, she defended him in public.

In her final few years, the once legendary beauty took to using a wheelchair in public to cope with crippling back pain, but she was still making appearances at charity events.

She was first diagnosed with congestive heart failure in 2004. She also had three hip replacement operations, a benign brain tumor, skin cancer, pneumonia and heart surgery.

Taylor died surrounded by her children, Michael Wilding, Christopher Wilding, Liza Todd, and Maria Burton. In addition, she is survived by 10 grandchildren and 4 great-grandchildren.