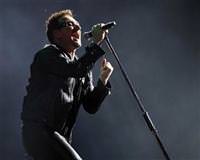 The world's four leading record labels have lent hit tracks to an album released on Friday to raise funds for the Japanese Red Cross Society following this month's earthquake and tsunami.

What started off as an initiative by Universal Music, the world's biggest record company, has turned into an industry-wide collaboration. The result is the 38-track "Songs for Japan."

Universal said it was handling the servicing of the digital album, while Sony Music would produce a physical version provisionally set to hit stores on April 4.

Featured on the album, available on the iTunes Store for $9.99, are artists including John Lennon ("Imagine"), U2 ("Walk On"), Bob Dylan ("Shelter From the Storm"), Lady Gaga ("Born This Way") and Bruce Springsteen ("Human Touch").

Participating artists, music labels and music publishers have waived their royalties and proceeds from global sales, and iTunes has also said it would donate its proceeds from the album to the Japanese Red Cross Society.

Following is the full track listing:

- Bob Dylan/"Shelter From The Storm"

- Bruno Mars/"Talking To The Moon"

- Justin Timberlake/"Like I Love You"

- Eminem/"Love The Way You Lie"

- Lady Antebellum/"I Run To You"

- Adele/"Make You Feel My Love"

- John Mayer/"Waiting On The World To Change"