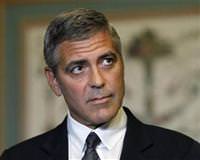 Italian Prime Minister Silvio Berlusconi has called Hollywood star George Clooney among his defense witnesses when he goes on trial next month accused of sleeping with an under-aged prostitute, court documents said.

Berlusconi is accused of having sex with Moroccan night-club dancer Karima el Mahroug, known by her stage name Ruby, when she was 17, below the legal age for prostitution in Italy.

In the trial, which begins on April 6, prosecutors accuse Berlusconi of having had sex with a "significant number" of prostitutes during parties held at his private villa near Milan.

He is also accused of abusing his office to have Ruby released from police custody where she was accused of theft, as part of a cover-up.

Ruby told prosecutors during questioning that Clooney and his partner, Italian actress Elisabetta Canalis, were among the guests at one of Berlusconi's parties, a claim denied by Canalis.

Clooney, a U.S. actor and activist, said he could recall meeting the Italian leader only on one occasion, about aid to Africa. "It seems odd since I've only met Berlusconi once and that was in an attempt to get aid into Darfur," Clooney said in a statement from his Los Angeles-based spokesman.

Clooney and Canalis are among an illustrious list of trial witnesses made public Tuesday, featuring well-known Italian television presenters, actors, journalists and politicians.

Berlusconi denies ever paying for sex and says his parties were normal, "convivial" dinners.