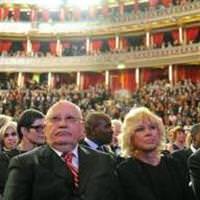 Movie stars, singers and politicians turned out on Wednesday at a gala concert in London to honor former Soviet President Mikhail Gorbachev as he celebrated his 80th birthday earlier this month.

The glitzy red carpet affair, co-hosted by actress Sharon Stone, underlined the celebrity status Gorbachev enjoys in the West, where is widely perceived as the man who freed Eastern Europe from Soviet rule and ended the Cold War.

"I think you could look around the world now and you see that there are still people fighting for freedom and there is kind of a direct line to Mikhail Gorbachev," Spacey told Reuters.

"And yet I don't think he's gotten the kind of due, or kind of respect or kind of adulation that I think he deserves. So (I'm) very happy that tonight people are going to take the time to pay tribute to him, celebrate his birthday."

Attitudes in Russia to the 1990 Nobel Peace laureate are more ambivalent, with many people lamenting the collapse of the Soviet Union and laying blame for the resulting economic hardships on Gorbachev.

"To me, he is a good-for-nothing man," said Sergei Orlov, a 53-year-old Moscow lawyer, told Reuters on March 2 when Gorbachev turned 80.

Gorbachev "simply betrayed his people, he destroyed the mechanism of the state and sold his country for nothing."

But he also enjoys star status in Russia, and met President Dmitry Medvedev on his birthday.

An exhibit dedicated to the end of the Soviet Union was on display in his honor near the Kremlin, and much fanfare was made of the anniversary on state television.

Medvedev also awarded Gorbachev Russia's top medal, calling it "a fitting evaluation of the big work you did as head of state" -- but, in a careful nod to Gorbachev's bitter critics, said that work "can be assessed in different ways."

The musical gala in London featured performances from Bryan Ferry and Shirley Bassey as well as leading Russian composer Valery Gergiev, and raised funds for the Gorbachev Foundation and Macmillan Cancer Support.