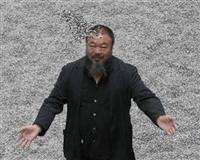 Britain and Germany called on Monday for the release of Chinese artist Ai Weiwei, a prominent critic of the ruling Communist Party who was detained by police as he was about to board a plane to Hong Kong.

"I call on the Chinese government to urgently clarify Ai's situation and wellbeing, and hope he will be released immediately," British Foreign Secretary William Hague said in a statement.

Hague added that human rights applied under the rule of law were "essential prerequisites" to China's long-term prosperity and stability.

German Foreign Minister Guido Westerwelle said he had learned of Ai's detention "with great concern" and urged China to free him at once and provide an explanation of the incident.

The Tate Modern gallery in London, where Ai's huge installation "Sunflower Seeds" made up of 100 million replica porcelain seeds is on display in the cavernous Turbine Hall, also said it was concerned about his disappearance.

"We are dismayed by developments that again threaten Weiwei's right to speak freely as an artist and hope that he will be released immediately," a spokesman said.

The 53-year-old artist's detention adds to a lengthening list of dissidents held in a security crackdown by a government determined to snuff out any hint of challenges to its power as it approaches a leadership transition in late 2012.

Ai, a favorite among art collectors who often pay sizeable sums for his works at auction, has the highest international profile of scores of critics detained in the past two months.

"They had a search order, but they didn't say what crime he had been accused of," he said.

The artist could not be contacted Monday, more than 24 hours after officials stopped him from boarding a plane to Hong Kong.

An assistant at his studio, who asked not to be named, said she was one of eight people questioned by police Sunday, with the artist's wife and driver later also detained.

Everyone apart from Ai was subsequently released, and his studio was open again.

Ai's career spans protests for artistic freedom in 1979, provocative works in the 1990s, and a hand in designing the Bird's Nest stadium for the 2008 Beijing Olympics.

His public comments, activities and art are some of the loudest and most flagrantly defiant forms of speech in China, where government controls on the Internet and traditional media constrain civil society.

Ai has never been formally arrested, despite his many brushes with the law.