PDN selects a Turk as one of the most promising photographers 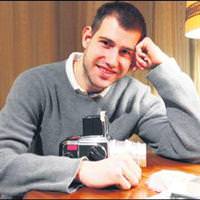 Pari Dukoviç, a 25-year-old Turkish national has been selected as one of the 30 most promising photographers by the United States’ Photo District News. Dukoviç hopes to win the Pulitzer.

Pari Dukoviç a Turkish citizen of Greek origins at the age of 25 has been selected by America's most prestigious photography magazine Photo District News (PDN) as one of the 30 most promising photographers. After being featured in the magazine a number of other publications including The New York Times also began to display Dukoviç's work.
Inspired by his father, at the age of 13 and 14, Dukoviç was already a noteworthy photographer. In 2002, after graduating high school Dukoviç went abroad to study photography at the Rochester Institute of Technology. After receiving his education, Dukoviç then began to work as a professional photographer. At some point his path crossed with New York photographer Platon, which is how he ended up working on the team that conducted the portrait shots of 110 world leaders in the United Nations as well as for the Obama portrait featured on the cover of Time.
Dukoviç is well aware that being selected as PDN's most promising 30 photographers for 2011 is quite an achievement. He also knows that once someone has made that list, their work is then closely followed from then on out. Therefore, he believes it's time for him to put out a variety of work. Dukovic, who is interested in the photography done for New York galleries, has already received an offer to work for The New York Times. Dukoviç states, "My goal is to create work that is worthy of winning the Pulitzer Prize."
Translation for Erdoğan
Pari Dukoviç was part of a four-person team headed by Platon to take photographs of world leaders in the United Nations Headquarters. It was there Dukoviç had the rare opportunity to meet Prime Minister Erdoğan. Dukoviç talked about Istanbul and helped translate for the premier as his photo was taken in a makeshift studio set up in the General Assembly. Recalling the experience, Dukoviç states, "Yes, we spoke for a short time, however the Prime Minister was very pleased that a Turk was taking part in the project. And I was very pleased to be able to translate for him."