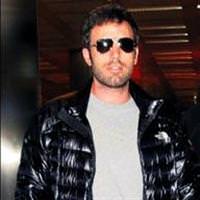 American actor, director and screenwriter Ben Affleck is in Turkey.

Known for his work in the 1998 film "Good Will Hunting", in which he shared the Oscar for Best Screenplay alongside Matt Damon, Ben Affleck arrived to Istanbul from New York yesterday morning on a Turkish Airlines flight.
The actor was unable to mask his surprise at seeing journalists upon his arrival to the Atatürk Airport International Terminal, and refused to comment on the reason for his trip.